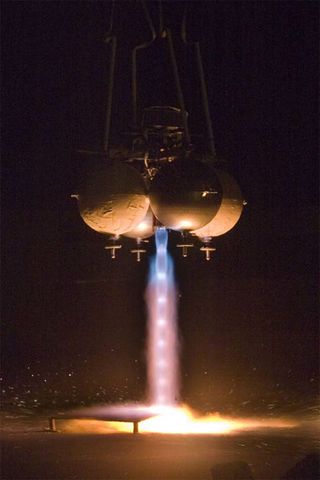 Golden, Colo.—Since 2001 Armadillo Aerospace has made more than 100 rocket-powered test flights using three different propellant combinations and some 50 engines in a dozen vehicles. The company also has used various kinds of attitude control systems and several generations of electronics boxes to control their launch vehicles.

Officials at the Mesquite, Texas-based company believe this step-by-step approach is helping them make significant inroads into computer-controlled, vertical-takeoff and vertical-landing technology that will lead to a new type of human suborbital—and eventually orbital—vehicles in the coming years.

“We’re sort of at the cusp where we have capabilities that, all of a sudden, people actually care about,” said John Carmack, a 36-year-old pioneering programmer in the computer gaming industry. “Previously, everything that we were doing could be easily dismissed as toys or little hobbies.”

The plan for Armadillo Aerospace is to push forward on a new generation of reusable vehicles. These will be fashioned around mass-produced, modular, bolt-together units composed of dual, liquid oxygen/ethanol propellant tanks mounted on top of an engine.

“In theory, we can bolt together as many as we need, whether it’s 16 or 64 of them,” Carmack said.“The modular approach permits Armadillo Aerospace to scale both boosters and upper stages to handle any size payload that is necessary. He sees modularized propulsion systems as the scaleable foundation that takes the company through commercial operations and, eventually, all the way to orbit.

This modular approach is expected to lead in the near future to a human-carrying vehicle for flights up to 100 kilometers, Carmack explained.

“All the pieces are right there,” Carmack said. “They are basically sitting right there in our shop. And it’s close. There are any number of things that can make it take longer … but there’s no more magic required.”

A self-confirmed “computer geek” turned lead rocketeer at Armadillo, Carmack made his fortune from id Software, a company he co-founded, and a series of innovative products such as the highly popular Doom and Quake video games. Carmack’s appetite for new approaches in rocketry draws on his passion for creative software. “For our aerospace work, we’re trying to apply the things that work so well in software,” he told Space News in a June 15 phone interview.

“There’s just no doubt that the pace of change in software is just radically and dramatically better than what we’ve seen in aerospace. Some of that is because of the differences between the replicability of software vs. hard systems,” Carmack said. “But there are a lot of things in just attitude and development pace that, I think, are just deeply and fundamentally broken in the classic aerospace mold … and that keeps it from being the vibrant, exciting world that we have in computers and electronics.”

From Carmack’s point of view, a spaceship—let alone—“is not nearly as complex as the video games that we make at id Software.”

Somewhat to his surprise, three major aerospace companies are talking to Armadillo Aerospace about flying sensor systems on Armadillo vehicles, using them as high-altitude platforms, Carmack said. Those flights are expected to begin in 2008. While not identifying the customers, he said one of those companies is not a domestic U.S.company.

“So we have finally crossed over into the realm of providing actual value that people care about,” Carmack added.

In addition, Orbital Outfitters, a startup firm with offices in North Hollywood, Calif., is designing new space suits for the coming age of space tourism. They plan to test their Suborbital Space Suit 1 using an Armadillo Aerospace-provided rocket, which will roar to an altitude of about 36,576 meters with a space-suited individual who will dive back back to Earth. Over the past six years, Carmack as a rocket entrepreneur has spent slightly more than $3 million bankrolling the work through his earnings from his computer gaming business.

“I think there’s a darn good chance we’re going to be net-profitable this year. And I think that probably within two years I would have paid off all my investment … and we’ll be bringing in steady income streams,” Carmack said.

At the Wirefly X Prize Cup — an expo of private rocketeers devoted to personal space travel — held in Las Cruces, N.M., in October, Armadillo was the sole competitor in the Northrop Grumman Lunar Lander Challenge. NASA provided $2 million in prize money under its Centennial Challenges program — a space agency initiative that promotes technical innovation through a program of competitions. At that event, Carmack and his fellow rocketeers flew the Armadillo Aerospace vehicle, dubbed Pixel. The crowd-pleasing vertical-takeoff and vertical-landing rocket ran well, propelling itself up into the sky, hovering, and then transitioning to a touchdown on a landing pad. However, Pixel ran into problems attempting to repeat its flight successfully and failed to earn a hefty slice of the prize money.

Carmack said the rocket hardware flew last month at the Oklahoma spaceport in Burns Flat, making back-to-back 90-plus second hops, “exactly conforming to the rules where we should have won the prize if it wasn’t restricted to only being held at the X Prize Cup.” Also last month, a 192-second hover test was successful, but under tethered conditions, he said.

Carmack said he and his team are preparing Pixel and a sistership, Texel, for a return to the Wirefly X Prize Cup this October to snag Lunar Lander Challenge money. “Over six years ago, I don’t think any of us realized just where we were going to end up at this point in time. And here we are six years later with a company that’s got two Federal Aviation Administration experimental permits under its wing … and some pretty serious flights that are attracting the attention of the big aerospace boys,” Neil Milburn, program manager for Armadillo Aerospace, said in a June 15 interview.

To keep an eye on the progress of Armadillo Aerospace, go to: http://armadilloaerospace.com/n.x/Armadillo/Home