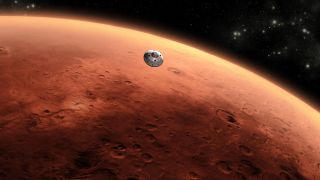 It may be time to call off the search for Mars' missing carbon.

Mars' carbon-rich atmosphere was once thick enough to raise the planet's surface temperature and allow entire oceans of liquid water to form there — a drastic change from the cold desert it is today. This metamorphosis of the Red Planet has put scientists on the hunt for a left-over "carbon reservoir" in the planet's dirt and soil. So far, the has come up empty.

But new research has concluded that "a large 'missing' carbon reservoir is unnecessary" to explain the planet's watery past, and that the Martian air wasn't exceptionally dense billions of years ago. . [Amazing Photos from Mars' Curiosity Rover]

Like any planetary system, Mars' atmosphere is intimately linked with conditions on the planet's surface. The new work Learning just how thick the atmosphere was long ago, and how quickly it changed, could help answer questions about Mars' evolution, and as well as its potential for supporting life

There's no doubt that ancient Mars was different than the Red Planet seen today. Humanity seems to have missed a heyday in the Red Planet's history, when the surface was spotted with lakes and oceans, temperatures were warmer, and the atmosphere was thicker.

Then again, the atmosphere would likely have consisted mostly of carbon dioxide, so it's not as though humans could have survived there unaided. But it's very possible that other forms of life found ancient Mars quite homey. (The very salty liquid water recently discovered on the surface of Mars suggests that the planet could still be hospitable to some life-forms.)

Where did Mars' thick atmosphere disappear to? Without a protective magnetic field around it, like Earth, Mars is exposed to the harsh environment of space. Energetic particles of light from the sun can chemically react with particles in the atmosphere and eject them from the planet. NASA's MAVEN orbiter recently showed that solar winds may have swept away a significant portion of Mars' atmosphere.

Freed carbon atoms could also have been absorbed into the Martian dirt and soil, creating what are called "carbonates" — a sort of residue left over by the now-gone atmosphere.

But tests of the Martian soil show very low levels of carbonates — the "carbon reservoir" has not been found.

"It's very hard proving that something has been lost," Yuk Yung, a professor of planetary science at the California Institute of Technology and an author on the new research paper, told Space.com.

He said the situation with Mars' atmosphere resembled asking a question about a bucket of water.

"Suppose I have a bucket of water, and there's only 1 inch [2.54 centimeters] of water in it," Yung said. "Suppose I tell you that some time ago, the bucket was full. Now, most of the water is gone. If I ask you for proof that it was full [that will be difficult]. It's very hard to prove something that's not there."

But Yung and his colleagues finally have their hands on concrete evidence about the thickness of the ancient, missing Martian atmosphere, and how quickly it escaped.

More than 10 years ago, Yung and his then-graduate student David Kass studied meteorites that had fallen to Earth, but which had originated on Mars. The researchers tested the meteorites, and looked for two kinds of carbon that are found in the Martian atmosphere: carbon 12 (called 12C) and carbon 13 (13C).

The meteorites provide the ratio of carbon 13 to carbon 12 that would have been present in ancient Mars. Measuring that same ratio for modern-day Mars actually proved more difficult; Yung and Kass initially tried to use data from NASA's Viking landers, but said the result was too uncertain.

Kass graduated before they could complete the project, but Renyu Hu, a post doctoral researcher now working with Yung at Caltech, picked up where they left off. It was the suite of science instruments on board the Curiosity rover that finally provided the measurement they needed.

"This is a very difficult measurement," Yung said. "We are now able to quantify what people previously could only estimate."

Comparing these values, Yung said it appears that the pressure in the atmosphere wasn't as high as some models predict. Specifically, it's less than 1 bar (which is about the pressure of Earth's atmosphere at sea level), while there are planetary models that estimate higher values.

This finding is significant because it changes the amount of carbonites scientists should expect to find in the Martian soil, and "does not require a massive undetected carbon reservoir," Hu said in a news release from NASA's Jet Propulsion Laboratory.

Yung said the measurement is new, but it is in agreement with the recent findings from MAVEN, showing how the Martian atmosphere may have been swept away by solar winds.

Yung said work still needs to be done to put the new results into detailed models of Mars' evolution, so scientists can discover what the findings reveal about Mars' history. Was the warm, wet period in the planet's lifetime a brief window? What would such a finding indicate for the possibility of life forming on the Martian surface? Working the new results into established models may reveal exciting new details.

"This solves a long-standing paradox," said Bethany Ehlmann, a researcher at Caltech and JPL, and co-author on the new research paper.

"The supposed very thick atmosphere [of ancient Mars] seemed to imply that you needed this big surface carbon reservoir," Ehlmann said, but the new paper shows that known processes are enough to explain the "missing" carbonates, and will allow scientists find "an evolutionary scenario for Mars that makes sense."