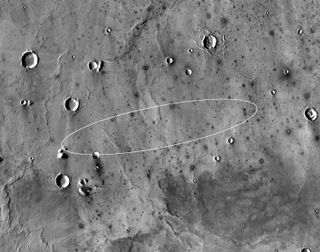 Map showing the area under evaluation as the landing site for NASA's InSight Mars mission, which is scheduled to launch in March 2016.
(Image: © NASA/JPL-Caltech)

NASA is leaning toward one particularly smooth patch of terrain just north of the Martian equator as the landing site for its next robotic Red Planet explorer.

The site lies at about 4 degrees north latitude and 136 degrees east longitude, agency officials said. It's the leading candidate for NASA's InSight Mars lander, which is scheduled to launch in March 2016 and touch down on the Red Planet in late September of that year.

"This is wondrous terrain, exactly what we want to land on because it is smooth, flat, with very few rocks in the highest-resolution images," InSight's site-selection leader, Matt Golombek of NASA's Jet Propulsion Laboratory in Pasadena, California, said in a statement.

"InSight" is short for Interior Exploration using Seismic Investigations, Geodesy and Heat Transport. After touching down, the lander will use several different science instruments to study Mars' crust, mantle and core, in an attempt to better understand how rocky planets take shape and evolve.

Data gathered by the $425 million InSight mission should reveal, among other things, the size of Mars' core, and whether it's liquid or solid, NASA officials have said.

InSight, which is based heavily on NASA's Phoenix Mars lander, features a heat-flow probe that will hammer itself up to 16.5 feet (5 meters) beneath the Red Planet's surface. So another top priority for landing-site selection, in addition to smooth terrain that will make touchdown as safe as possible, is ground that is soft enough for for the probe to burrow so deep.

The site currently being evaluated is one of four finalists selected in 2014, all of which lie in a flat Martian region called Elysium Planitia. Each site consists of a landing ellipse that measures about 81 miles (130 kilometers) long by 17 miles (27 km) wide.

"The single site will continue to be analyzed in coming months for final selection later this year," NASA officials wrote in the statement. "If unexpected problems with this site are found, one of the others would be imaged and could be selected."

The InSight lander is being built at Lockheed Martin Space Systems' facility in Denver. InSight will be the first Mars mission to launch from California; it's scheduled to lift off from Vandenberg Air Force Base, just northwest of Santa Barbara. The launch window runs from March 4 through March 30.