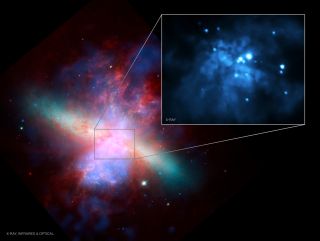 A compact dead star known as a pulsar is the source for one of two superbright X-ray signals from a distant galaxy,a surprising find that could mean that pulsars lie at the heart of other such known sources, scientists say.

The pulsar is the brightest of its kind ever seen, and is more than 10 million times brighter than the sun, researchers said.The discovery may even have possible implications for astronomers' understanding of how galaxies form, they added.

Scientists had long thought that black holes were the only sources for ULXs. As black holes consume nearby material, they emit powerful X-rays thought to be responsible for the extremely bright ULX objects. The the newly identified pulsar,

"Until now, nobody paid too much attention to neutron stars — pulsars — in ULXs," lead author of the new study, Matteo Bachetti, of the Université de Toulouse in France, told Space.com by email. "From now on, people will be looking for more pulsations in these objects that might identify them as pulsars, and so neutron stars. I bet some other ULXs will be identified as pulsars in the following years." [See images of black holes around the universe]

Bachetti and his team used NASA's NuSTAR telescope to examine M82 X-2, one of two ULXs located in the cigar-shaped galaxy M82, a which is located approximately 12 million light-years from Earth. The object, they discovered, is a dense neutron star that pulses as it spins, giving it its "pulsar" name.

"If it were as close as the sun, we would be fried before even being born," Bachetti said.

While studying the ULX, the researchers noticed a strange pulsation every 1.37 seconds that appeared several days after the start of their observations. Such pulsations do not occur around black holes, but do happen around pulsars.

These pulsing stars sweep beams of light, much like a lighthouse beam, that can be detected by astronomers on Earth. They are a type of neutron star, objects that occur when a supernova explodes, leaving behind a dense star. As pulsars gobble material from nearby stars or other objects, they give off light, including the X-rays observed by Bachetti’s team.

In the past, pulsars have been discarded as an option for all but the weakest ULXs. The reason: They simply shouldn't be able to consume material fast enough to reach the brightness, or luminosity, demonstrated by ULXs. M82 X-2 shines 100 times brighter than models anticipate for such a system.

"This is going to be a problem challenging theorists when they read this result," Jeanette Gladstone, of the University of Alberta in Canada, told Space.com by email. Gladstone, who was not part of the research, studies accreting compact objects, with a focus on ULXs. She authored a News & Views article that appeared alongside the research in the journal Nature online today (Oct. 8).

Because the pulsar is consuming material faster than theories thought possible, the find may have a profound effect on scientists' understanding of accretion physics.

Like neutron stars, black holes are born at the end of a star's lifetime. As a star blows off material in a violent supernova, a black hole may be left behind. This massive object is so gravitationally strong that not even light can escape its grip, which is why scientists have to study black holes indirectly, by how they interact with their environments. [How NuSTAR Hunts Black Holes (Infographic)]

In a binary system, black holes, like neutron stars, can accrete material from their companions, radiating energy in the form of X-rays. Some black holes are star size, while others are extremely massive; such supermassive black holes lie at the center of galaxies, including the heart of the Milky Way.

The black holes thought to be responsible for powering ULXs lie somewhere between the two in size; these intermediate black holes weigh hundreds to thousands of times the mass of the sun. Such black holes have proven elusive to astronomers. However, separate research has begun to cast doubt on the hypothesis that these objects power ULXs, as oddly behaving stellar-mass black holes come under closer scrutiny as potential sources of ULX emissions.

Black holes have been targeted as the most likely sources because of their extremely densely packed masses. The more massive an object, the more rapidly it feeds off of its companion. The speed of such "feeding" associated with ULXs had suggested that a black-hole-size mass was necessary. In comparison, a pulsar is only about 1.4 times as massive as the sun, though such a star is packed into a ball with a city-sized diameter.

"Neutron stars were mostly discarded for all but the weakest sources of the sample, because the 'speed of the meal' should have been too high for such a small object," Bachetti said.

The revelation that a pulsar powers M82 X-2 may drive astronomers to take a closer look at previously identified ULXs.

"We need to look more carefully at the population of ULXs," Gladstone said. "We may find other exciting sources that will also push the limits of our understanding."

"NuSTAR is just perfect for the job," Bachetti said.

Unlike most telescopes, NuSTAR can measure the oscillations and pulsations that categorize M82 X-2 as a pulsar. Furthermore, the pulsations are stronger at the X-ray energies where NuSTAR is more sensitive than any other satellite, he said.

Such pulsations may prove to be tricky to identify in other sources, as M82 X-2 apparently endured periods of low or no pulsation. However, examining already-identified sources may well turn up more pulsars that were previously classified as black holes.

"I would root for the 'rare object' team," Bachetti said.

Identifying a pulsar at the heart of a ULX is important to more than just the study of these extremely bright objects.

"Knowing that you can have accretion at these incredible rates has implications on the models of the evolution of black holes and galaxies," Bachetti said. "For these models, the maximum rate at which compact objects accrete and grow is an important parameter to understand how the universe has evolved."