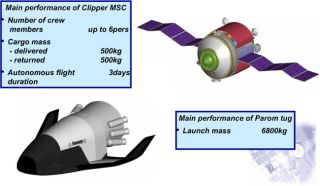 Russia's plan calls for a six-person Clipper spacecraft to be hauled to the ISS via the Parom tug.
(Image: © RSC Energia.)

TheRussian-proposed program, formerly called Clipper, has evolved into a moremodest effort to start with an evolved and enlarged Soyuz capsule as a designfocus. Only later would the program, now called Advanced Crew TransportationSystem (ACTS), move to a possibly winged spacecraft along the lines of what theRussians have proposed for Clipper.

Theseissues include a division of labor between the Russian and European companieson development of the major ACTS systems -- docking, leading-edge materials,avionics and other technologies. ESA has insisted that it be given developmentauthority over a mission-critical system and not be limited to asubcontractor's role. Sacotte said the Japanese space agency, JAXA, hasindicated that, if Europe joins Russia in the program, Japan will do likewise.

By 2008,Sacotte said, the partners should be in a position to determine whether afull-scale development effort is warranted.

Moreimmediately, Sacotte said, the Russian space agency, Roskosmos, this summerwill select a Russian prime contractor for the ACTS studies. Europe then willassemble a consortium of its own to work with the Russian company.

ESA'sprincipal member states, including France, Germany, Italy and Belgium, have allindicated that they want to participate in the development of a manned vehiclethat would be capable of performing a range of missions in the post-shuttleera. The U.S. space shuttle is scheduled to be retired in 2010.

Europeangovernment officials have said they will not embark on a solo developmenteffort. They have approached NASA about joining the U.S. Crew ExplorationVehicle program but have been rebuffed by the current U.S. government policy ofmaking the vehicle off limits to non-U.S. participants.

Russia hastaken the opposite approach, and has solicited ESA involvement in designing avehicle that would carry six astronauts and be capable of rendezvous and dockingin orbit, and ultimately of carrying out manned lunar missions and perhaps Marsexploration as well.

Russia'sSoyuz rocket is being modified for launch from Europe's equatorial Guiana SpaceCenter in French Guiana, with a first launch scheduled for late 2008. Thatvehicle is designed to carry only satellites, not astronauts. But Russian andEuropean officials say an ACTS agreement would include both the French Guianasite and Russia's Baikonur Cosmodrome in Kazakhstan as launch bases for futuremanned ACTS missions.

SergioVetrella, president of the Italian Space Agency, said June 21 that Italy likelywill be contributing to the two-year study effort at ESA in the hope that, by2008, ACTS' mission and design are more clearly designed.

SigmarWittig, executive chairman of the German aerospace center, DLR, said June 21that Germany also would take part in the two-year ESA-led work, but that ACTSand Clipper are not ready to go beyond the study phase.

"I startwith data points," Wittig said. "One data point is the shuttle's announcedretirement in 2010. Another is the need for a six-passenger vehicle to servethe space station. A third is Russia's plans to upgrade or replace the currentSoyuz capsule. These are starting points. Obviously more are needed."

Sacottesaid the two-year study would include negotiations with Russia on how to treattechnology transfer between Europe and Russia. He said discussions so far withRoskosmos have led him to believe that these concerns will not be majorobstacles.