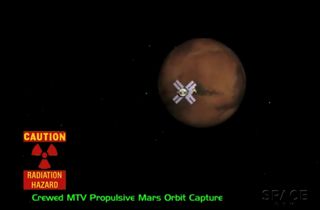 This still frame from a video illustrates the danger of overexposure to radiation for astronauts on a mission to Mars.
(Image: © NASA)

Both male and female astronauts are not allowed to accumulate a radiation dose that would increase their lifetime risk of developing fatal cancer by more than 3 percent. A six-month mission on the International Space Station exposes astronauts to about 40 times the average yearly dose of background radiation that a person would receive living on Earth, NASA spokesman William Jeffs said in an email.

While the level of risk allowed for both men and women in space is the same, women have a lower threshold for space radiation exposure than men, according to physiological models used by NASA.

"Depending on when you fly a space mission, a female will fly only 45 to 50 percent of the missions that a male can fly," Peggy Whitson, the former chief of NASA's Astronaut Corps, said. "That's a pretty confining limit in terms of opportunity. I know that they are scaling the risk to be the same, but the opportunities end up causing gender discrimination based on just the total number of options available for females to fly. [That's] my perspective." [Radiation Threat for Mars-Bound Astronauts (Video)]

NASA follows radiation exposure recommendations established by the National Council of Radiation Protection and Measurements. The exposure limits for women are about 20 percent lower compared to men "largely due to additional cancer risk for woman from breast, ovarian, and uterine cancers," Jeffs told SPACE.com.

The models governing the radiation limits are based, in part, on data collected from the aftermath of the nuclear bomb that was dropped on the Japanese city of Hiroshima in 1945, Whitson said.

"I think that the current standards are too confining for exposure limits based on my personal experience and because I think it limits careers more than it is necessary," Whitson said during an Institute of Medicine Workshop on Ethics Principles and Guidelines for Health Standards for Long Duration and Exploration Class Spaceflights requested by NASA on July 25.

"In my case, if I had a Y chromosome, I would be qualified," Whitson added. "Because I have two X's, I'm not."

Radiation exposure is one of the major factors preventing manned space exploration from extending farther into the solar system. A mission to Mars now would probably put either a male or female astronaut above the 3 percent threshold risk of developing cancer, according to scientists.

By going farther into the solar system and spending more time in space, with current shielding technologies, male and female astronauts would be exposed to levels of radiation that exceed the 3 percent limit for both men and women.

Out of about 50 astronauts in NASA's corps at the time, only three astronauts were eligible for NASA's one-year mission to the International Space Station, partially because of the stringent radiation limits imposed by the space agency, said Robert Behnken, the current chief of NASA's Astronaut Office.

"We were effectively limited to three candidates for the two positions, the prime and backup for that flight based on the programmatic and health constraints that were in place," Behnken said during the workshop. "We are running into these limits now with the exploration that we're doing, so it's not a stretch to assume that if you go further and farther and longer, you're going to run into them continuously with the exploration class missions."

The pool of eligible astronauts was limited not just by radiation concerns, but other factors, including Russian-language proficiency and "technical ratings" for various astronauts, Behnken said. If the radiation limit was different, it might have doubled the number of eligible spaceflyers, Behnken added.

Radiation exposure limits shouldn't necessarily be broken for every mission, Behnken said. The science that could be gained from certain missions might merit the risk astronauts would take to perform it, he added.

"The value of the individual mission would need to be assessed in terms of what the need was to potentially break through that limit," Behnken said. "If there are mitigation strategies, whether it's long-term surveillance, additional screening to protect from cancer or detect it early, I think that those mitigations would be applicable to all astronauts that would take these missions on, not simply the one that's got a slightly elevated risk of cancer."