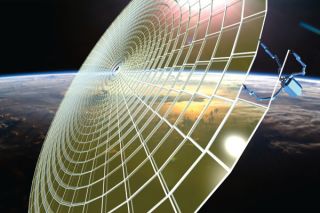 Spacecraft could build themselves or huge space telescopes someday by scavenging materials from space junk or asteroids. That wild vision stems from a modest proposal to use 3D printing technology aboard a tiny satellite to create a much larger structure in space.

The "SpiderFab" project received $100,000 from NASA's Innovative Advanced Concepts program to hammer out a design and figure out whether spacecraft self-construction makes business sense. Practical planning and additional funding could lead to the launch of a 3D-printing test mission within several years.

"We'd like someday to be able to have a spacecraft create itself entirely from scratch, but realistically that's quite a ways out," said Robert Hoyt, CEO and chief scientist of Tethers Unlimited Inc. "That's still science fiction."

Using 3D printers to build spacecraft parts in orbit would offer an easier way to construct huge space antennas or space telescope components 10 or 20 times larger than today's counterparts without having to fold them up and squeeze them inside a rocket — missions could simply launch with the 3D printers and raw materials. [NASA Looks to 3D Printing for Spare Space-Station Parts]

The idea could also cut space mission costs and boost mission capabilities by making much lighter and larger structures in space, Hoyt explained. That's because space manufacturing avoids the need to make heavier spacecraft components that can not only stand up to Earth's gravity, but can also survive the shaking and acceleration of rocket launches.

"The system could then morph in orbit into a very large system a dozen or hundreds of meters in size," Hoyt told InnovationNewsDaily. "It would be like launching a CubeSat that creates a 50 meter-length boom."

(Cubesats have a size comparable to a loaf of bread, whereas 50 meters (164 feet) is equivalent to the length of a track and field event.)

Hoyt even envisions the space manufacturing technology building space telescopes the size of ARICEBO — a 1,000-foot (305-meter) telescope radio telescope in Puerto Rico. Or the technology could allow space probes to visit distant star systems and begin building sensor arrays and communications transmitters to send signals back to Earth.

The technology might even build upon DARPA's Phoenix idea of scavenging parts from old or broken spacecraft to build a new Frankenstein satellite, except that the space manufacturing could break down both spacecraft parts and materials from asteroid mining.

"We're also working on robot arm systems, so we're hoping at some point to combine that project with our SpiderFab project," Hoyt said.