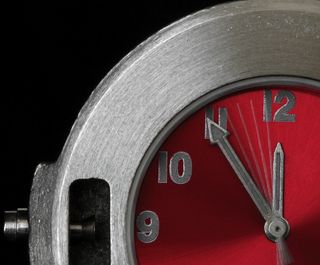 The Bulletin of the Atomic Scientists has reset the "Doomsday Clock" to 5 minutes before midnight, a minute closer to humanity's imminent destruction, symbolized by "midnight," than last year.
(Image: © T.W., Shutterstock)

In a sign of pessimism about humanity's future, scientists today set the hands of the infamous "Doomsday Clock" forward one minute from two years ago.

"It is now five minutes to midnight," Bulletin of the Atomic Scientists (BAS) director Kennette Benedict announced today (Jan. 10) at a press conference in Washington, D.C.

That represents a symbolic step closer to doomsday, a change from the clock's previous mark of six minutes to midnight, set in January 2010.

The clock is a symbol of the threat of humanity's imminent destruction from nuclear or biological weapons, climate change and other human-caused disasters. In making their deliberations about how to update the clock's time, the Bulletin of the Atomic Scientists focused on the current state of nuclear arsenals around the globe, disastrous events such as the Fukushima nuclear meltdown, and biosecurity issues such as the creation of an airborne H5N1 flu strain.

The Doomsday Clock came into being in 1947 as a way for atomic scientists to warn the world of the dangers of nuclear weapons. That year, the Bulletin set the time at seven minutes to midnight, with midnight symbolizing humanity's destruction. By 1949, it was at three minutes to midnight as the relationship between the United States and the Soviet Union deteriorated. In 1953, after the first test of the hydrogen bomb, the doomsday clock ticked to two minutes until midnight.

The Bulletin — and the clock ­— were at their most optimistic in 1991, when the Cold War thawed and the United States and Russia began cutting their arsenals. That year, the Bulletin set the clock at 17 minutes to midnight.

From then until 2010, however, it was a gradual creep back toward destruction, as hopes of total nuclear disarmament vanished and threats of nuclear terrorism and climate change reared their heads. In 2010, the Bulletin found some hope in arms reduction treaties and international climate talks and nudged the minute hand of the Doomsday Clock back to six minutes from midnight from its previous post at five to midnight.

With today's decision, the Bulletin repudiated that optimism. The panel considers a mix of long-term trends and immediate events in the decision-making process, said Benedict. Trends might include factors like improved solar energy technology to combat climate change, she said, while political events such as the recent United Nations climate meeting in Durban play a role as well. This year, the Fukushima nuclear disaster made a big impression.

"We're trying to weight whether that was a wake-up call, whether it will make people take a closer look at this new and very powerful technology, or whether people will go on with business as usual," Benedict told LiveScience on Monday in an interview before the announcement of the "doomsday time" decision. [Top 10 Alternative Energy Bets]

Other factors that played into the decision included the growing interest in nuclear power from countries such as Turkey, Indonesia and the United Arab Emirates, Benedict said.

The Bulletin panel found that despite hopes of global agreements about nuclear weapons, nuclear power and climate change in 2010, little progress has been made.

"The world still has approximately over 20,000 deployed nuclear weapons with enough power to destroy the world's inhabitants many times over," said Lawrence Krauss, an Arizona State University professor and the co-chair of the BAS Board of Sponsors. "We also have the prospect of nuclear weapons being used by terrorist non-state actors."

Likewise, talks on climate change have resulted in little progress, the panel found. In fact, politics seemed to trump science in discussions over the last two years, said Robert Socolow, a Princeton professor of mechanical and aerospace engineering and a member of the Bulletin's Science and Security board.

"We need the political leadership to affirm the primacy of science as a way of knowing, or problems will be far worse than they are already," Socolow said.