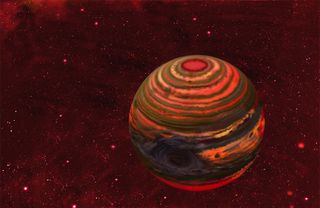 Extreme brightness changes observed on a nearby tiny brown dwarf star may indicate a storm grander than any yet seen on an alien world, scientists say.
(Image: © Jon Lomberg)

Astronomers have discovered more than two dozen previously unknown failed stars, including one that ranks among the puniest of its kind, new research finds.

The newfound objects are brown dwarfs, strange bodies that are larger than planets but too small to trigger the internal nuclear fusion reactions required to become full-fledged stars. Astronomers discovered the objects in two young star clusters using Japan's Subaru Telescope in Hawaii and the Very Large Telescope in Chile.

One of the brown dwarfs is just six times the mass of Jupiter, making it "one of the puniest free-floating objects known," researchers said in a statement.

"Its mass is comparable to those of giant planets, yet it doesn't circle a star," said Aleks Scholz of the Dublin Institute for Advanced Studies in Ireland. Scholz is lead author of one upcoming paper reporting the team's findings. "How it formed is a mystery." [The Strangest Things in Space]

Several of the failed stars discovered in the new survey have masses about 20 times that of Jupiter, placing them at the low end of the known mass range for brown dwarfs, researchers said.

NGC 1333 has an odd surplus of failed stars, harboring half as many brown dwarfs as normal stars, researchers said.

"Brown dwarfs seem to be more common in NGC 1333 than in other young star clusters," said Koraljka Muzic of the University of Toronto, lead author of another upcoming paper announcing the findings. "That difference may be hinting at how different environmental conditions affect their formation."

The team used the Subaru Telescope to take extremely deep images of the two star clusters at both optical and infrared wavelengths. Researchers identified candidate brown dwarfs by their very red colors, then confirmed them with spectra measurements taken at Subaru and the Very Large Telescope.

"Our findings suggest once again that objects not much bigger than Jupiter could form the same way as stars do," said Ray Jayawardhana of the University of Toronto, principal investigator of the survey that found the new brown dwarfs. "In other words, nature appears to have more than one trick up its sleeve for producing planetary mass objects."

The team's findings are reported in two upcoming papers in the Astrophysical Journal and were presented Tuesday (Oct. 11) at a scientific conference in Garching, Germany.