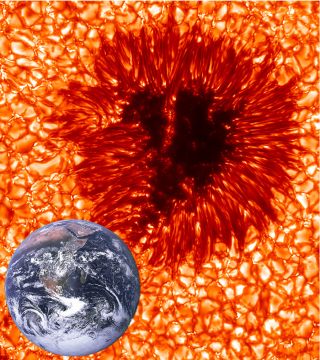 A photo of a sunspot taken in May 2010, with Earth shown to scale. The image has been colorized for aesthetic reasons. This image with 0.1 arcsecond resolution from the Swedish 1-m Solar Telescope represents the limit of what is currently possible in terms of spatial resolution.
(Image: © The Royal Swedish Academy of Sciences, V.M.J. Henriques (sunspot), NASA Apollo 17 (Earth))

Astronomers will unveil a "major result" on Tuesday (June 14) regarding the sun's 11-year sunspot cycle.

The announcement will be made at a solar physics conference in New Mexico, according to an alert released today (June 10) by the American Astronomical Society. The discussion will begin at 1 p.m. EDT (1700 GMT).

Sunspots are blotches on the sun that appear dark because they are significantly cooler than the rest of the solar surface. While they look small from our vantage point on Earth, these enigmatic structures can be huge — up to 30,000 miles (48,280 kilometers) across, or as wide as the planet Neptune. Sunspots last for a few days or weeks before dissipating. [Photos: Sunspots on Earth's Star]

Sunspots are of interest to astronomers because they serve as an indicator of solar activity, which waxes and wanes in an 11-year cycle. In fact, scientists map out this cycle based on sunspot numbers.

Currently, the sun is in the midst of its Solar Cycle 24, the 24th cycle since observations began.

Recently, the sun has begun rousing itself from an extended quiescent period. Over the past several months, our star has unleashed several immensely powerful flares and sent huge volumes of solar plasma rocketing toward Earth, in massive eruptions known as coronal mass ejections (CMEs).

In the near future, the flares and CMEs should get more frequent and more intense. Researchers predict that solar activity will peak sometime in 2013 or 2014.

Return to SPACE.com Tuesday for the results of the sunspot study announcement.