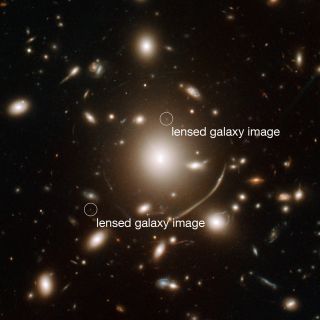 Using the galaxy cluster Abell 383 (center) as a "gravitational lens," astronomers identified a galaxy so far away we see it as it was 950 million years after the Big Bang. It is visible as two tiny dots on either side of Abell 383. Distant objects seen through gravitational lenses are typically multiply imaged and heavily distorted.
(Image: © NASA, ESA, J. Richard (CRAL), J.-P. Kneib (LAM). Acknowledgement: Marc Postman (STScI))

The first galaxies may have formed much earlier than thought, a new study suggests — just 200 million years or so after the universe's birth.

Using several different telescopes, astronomers have discovered a distant galaxy whose stars appear to have formed 200 million years after the Big Bang, the explosive event that brought the universe into being.

That's about 300 million years earlier than the oldest previously known galaxies. The universe itself is estimated to be 13.7 billion years old.

The finding could force astronomers to rethink what they seem to know about the cosmos and its early days, researchers said.[Photo of the newfound galaxy]

"This challenges theories of how soon galaxies formed and evolved in the first years of the universe," study lead author Johan Richard, of France's Center of  Astronomical Research of Lyon, said in a statement. "It could even help solve the mystery of how the hydrogen fog that filled the early universe was cleared."

In a galaxy far, far away

The newfound galaxy is not the farthest-flung galaxy ever detected; several with younger stars have been spotted at greater distances, the researchers said.

They detected the galaxy through a cluster of galaxies called Abell 383, whose powerful gravity bends light rays almost as a magnifying glass would. The alignment of the newfound galaxy, Abell 383 and Earth amplified the galaxy's light, allowing the researchers to make detailed observations.

“Without this big lens in space, we could not study galaxies this faint with currently available observing facilities,” said study co-author Eiichi Egami of the University of Arizona. “Thanks to nature, we have this great opportunity to see our universe as it was eons ago.”

Using the Keck-2 telescope in Hawaii, the team then analyzed the galaxy's light, determining its redshift. "Redshift" measures the distance that an object has moved away from Earth as space expands, through observations of the stretching of the object's light to longer (or redder) wavelengths.

Light from objects moving away from us shifts to the red end of the spectrum as its wavelengths are stretched. The shift, known as the Doppler phenomenon, is experienced on Earth when sound waves from an ambulance change pitch when the ambulance moves toward you versus away from you.

Astronomers use redshift measurements to determine an object's distance, and by extension its age. The bigger the redshift, the greater the distance.

The newfound galaxy’s redshift turned out to be 6.027, which indicates that astronomers are viewing it the way it appeared when the universe was around 950 million years old.

"Our work confirms some earlier observations that had hinted at the presence of old stars in early galaxies," said co-author Dan Stark, of the University of Cambridge in the United Kingdom. "This suggests that the first galaxies have been around for a lot longer than previously thought.”

Richard and his team publish their results in an upcoming issue of the Monthly Notices of the Royal Astronomical Society.

The discovery has implications beyond the question of when galaxies first formed, researchers said. For example, it may help explain how the universe became "reionized."

About 300,000 years after the Big Bang, the hydrogen in the universe was neutral, meaning it carried no charge. Over the course of the next1 billion years, however, something threw off enough radiation to ionize most of this hydrogen, splitting it into its constituent electrons and protons. This reionization made the hydrogen transparent to ultraviolet light, clearing the "fog" of the early universe.

Astronomers suspected that the radiation that powered this reionization must have come from galaxies. But researchers had not found enough old, distant candidate galaxies to provide the necessary radiation.

The new study may help solve this enigma, researchers said.

“It seems probable that there are in fact far more galaxies out there in the early universe than we previously estimated — it’s just that many galaxies are older and fainter, like the one we have just discovered,” said co-author Jean-Paul Kneib, of the Laboratoire d’Astrophysique de Marseille in France.

As of today, we can discover these galaxies only by observing them through massive clusters that act as cosmic telescopes, as Abell 383 does. NASA's next-generation James Webb Space Telescope, however, will specialize in high-resolution observations of distant, highly redshifted objects.

The James Webb Space Telescope, an infrared space observatory slated to launch no earlier than autumn 2015, could help solve this and other cosmic mysteries, researchers said.