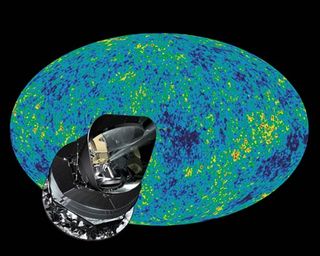 In this image, Planck is superimposed on a false-colour map of the CMB charted by NASA's WMAP satellite in 2003. Planck will improve enormously the sharpness and clarity of all the features in the map.
(Image: © ESA (AOES Medialab), NASA/WMAP)

The coldestknown object out in space has now been announced by scientists. It's not afrozen comet or even some distant, chilly gas cloud. Rather, it's a spacecraft.

On July 3,the European Space Agency?s Planck spacecraft reached this frigid extreme aspart of a key step in the satellite's mission to observe the remnant radiationof the Big Bang.

Since itslaunch on May 14 (accompanied by its sibling spacecraft Herschel), Planck has been traveling to itsfinal orbit at the second Lagrange point of the sun-Earth system, L2, andcooling its instruments down to their operational temperature of minus 459.49degrees Fahrenheit (minus 273.05 Celsius). This temperature is just 0.1 Celsiusabove absolute zero, the coldest temperature theoretically possible in ouruniverse.

?It isindeed both the coldest spot in any spacecraft that we know about, and also thecoldest known object in space, including dust, gas etc.,? Planck projectscientist Jan Tauber wrote in an email. ?Of course in a laboratory on Earth,colder spots can be made.?

Such lowtemperatures are necessary for Planck?s detectors to study the Cosmic MicrowaveBackground (CMB) ? the first light released by the universe, only 380,000 yearsafter the Big Bang ? by measuring its temperature across the sky.

Over thenext few weeks, mission operators will fine-tune the spacecraft?s instruments.Planck will begin to survey the sky in mid-August.

Planck isequipped with a passive cooling system that brings its temperature down toabout minus 382 F (minus 230 C) by radiating heat into space. Three activecoolers take over from there, and bring the temperature down further to anamazing low of minus 459.49 F (minus 273.05 C).

The CMB canbe detected in all directions of the sky at an average temperature of 2.73degrees Kelvin (minus 450 degrees Fahrenheit or minus 270 degrees Celsius).Previous space-based missions have found that the temperature of the CMB variesever so slightly in different areas. Planck is built to resolve thesevariations in greater detail.

Planck?sdetectors will look for variations in the temperature of the CMB that are abouta million times smaller than one degree ? this is comparable to measuring fromEarth the heat produced by a rabbit sitting on the Moon.

The photonsin the CMB could also tell astronomers when and how the first stars formed.They could also shed light, so to speak, on how galaxies, galaxy clusters andthe large voids in space came to be.

?Everyonehere is quite happy to see Planck getting into its operational orbit,"said Chris Watson, Spacecraft Operations Manager.

Planck isslated for a 15-month mission, time enough for two full surveys of the sky.