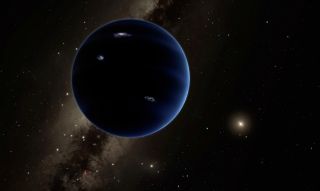 Citizen scientists have flagged four objects for follow-up study in the hunt for the hypothetical Planet Nine.

The four unknown objects were spotted in images of the southern sky captured recently by the SkyMapper telescope at Siding Spring Observatory in Australia. More than 60,000 people from around the world scoured these photos, making about 5 million classifications, said researchers with the Australian National University (ANU), which organized the citizen-science project.

Astronomers will now use Siding Spring and other telescopes around the world to investigate the four objects to determine if they're viable Planet Nine candidates. But even if they're not, the search has still yielded valuable information, project team members said. [The Evidence for 'Planet Nine' in Images (Gallery)]

"We've managed to rule out a planet about the size of Neptune being in about 90 percent of the southern sky out to a depth of about 350 times the distance the Earth is from the sun," research leader Brad Tucker, from the ANU Research School of Astronomy and Astrophysics, said in a statement.

"With the help of tens of thousands of dedicated volunteers sifting through hundreds of thousands of images taken by SkyMapper, we have achieved four years of scientific analysis in under three days," Tucker added. "One of those volunteers, Toby Roberts, has made 12,000 classifications."

The existence of Planet Nine was first seriously proposed in 2014 by astronomers Scott Sheppard and Chadwick Trujillo, who noted that the newfound body 2012 VP113, the dwarf planet Sedna and several other objects far beyond Pluto share distinct orbital characteristics. This coincidence could be explained by a giant, unseen "perturber" lurking in the solar system's outer reaches and tugging on the objects, Sheppard and Trujillo said.

Astronomers Konstantin Batygin and Mike Brown bolstered this hypothesis in January 2016, finding evidence that this putative perturber (which they dubbed Planet Nine) may be sculpting the orbits of additional distant objects.

Batygin and Brown calculated that Planet Nine — if it exists — is likely about 10 times more massive than Earth and orbits the sun on a highly elliptical path that takes it up to 1,000 astronomical units (AU) from the sun. (One AU is the average Earth-sun distance — about 93 million miles, or 150 million kilometers.)

The hunt for Planet Nine is now on, as shown by the ANU-led effort, which involved the citizen-science site Zooniverse.org. You can learn more about it here (but note that the public-participation aspect of the project has ended): https://www.zooniverse.org/projects/skymap/planet-9