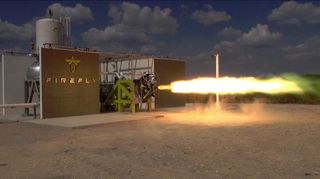 A company that aims to launch small satellites to orbit has successfully tested its first rocket engine.

"The successful testing of our first engine represents a quantum step in the technical maturation of our company," Firefly co-founder and CEO Thomas Markusic said in a statement. "We have demonstrated that our core engine design can reliably start, stop and operate at a steady state without combustion instabilities."

FRE-R1 is a pathfinder for the engines that will power Firefly Alpha, a two-stage small-satellite launcher the company is developing. FRE-R1 operates using liquid oxygen and a refined form of kerosene known as RP-1, but the basic engine design can accommodate methane instead of RP-1, if desired, Firefly representatives said.

The first stage of Firefly Alpha will incorporate 12 "aerospike" engines arrayed in a ring pattern. Aerospike engines — which are wedge-shaped, without the familiar bell-shaped rocket nozzle — use aerodynamic principles to increase efficiency across the broad range of pressures experienced during flight, Firefly representatives said.

Tiny satellites are playing a larger and larger role in spaceflight and space science, with some "cubesats" even scheduled to head to Mars, the moon and other deep-space destinations in the next few years.

Today, such bantam craft must usually hitch rides on large rockets as secondary payloads, but Firefly hopes to change things by offering a dedicated small-sat launcher that provides efficient and relatively low-cost access to space.