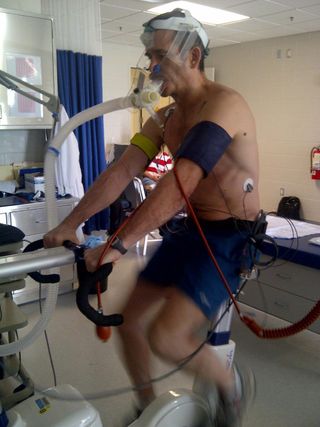 In a few moments, astronaut Chris Hadfield changed from an orbiting Man of Steel-type to one who needs to heal from microgravity's effects.

Hadfield recently spoke of his Superman-like moments of strength during five months spent on the International Space Station: wielding refrigerators with his fingertips, or somersaulting with a simple tuck and turn.

Coming back to Earth, however, presented operational challenges for the Expedition 35 commander, Hadfield acknowledged in a press conference three days after his May 13 landing aboard a Russian spacecraft touching down in Kazakhstan. [Astronaut Chris Hadfield's 8 Most Amazing Space Moments]

"Right after I landed, I could feel the weight of my lips and tongue and I had to change how I was talking," Hadfield said in the press conference, which was broadcast on the Canadian Space Agency's website May 16. "I hadn't realized that I learned to talk with a weightless tongue."

Speech is one issue, but other health effects are more pressing for long-term orbiting astronauts. Bone density lessens at a rate of 1 percent a month. Muscle mass shrinks. Eyeball pressure changes, with roughly one-fifth of astronauts reporting vision issues.

Until about June 3, Hadfield will do an intensive battery of testing and recovery at NASA's Johnson Space Center in Houston before pursuing an independent physical rehabilitation program for a few months.

The data gathered during this period is crucial not only to ensure his health, but to add more information ahead of the one-year International Space Station crew missions NASA plans to begin in 2015.

Every day, Hadfield performs a couple of hours of medical tests. Some are scientific, to form part of larger studies about astronaut health. Some are more specific to his condition to ensure he is meeting recovery standards.

Several standard tests take place during the first few weeks of astronauts' return. For example, sometimes they'll stand on a neurodistibular platform that is tilted to test balance. MRIs and optical coherence tomography (infrared images of the retina and optic nerve) are done on their eyes to follow up on ultrasound testing in flight.

During this time Raffi Kuyumjian, the Canadian Space Agency's chief medical officer and Hadfield's personal flight surgeon, has been working closely with the astronaut. Kuyumjian, who normally works at the CSA's headquarters near Montreal, is spending three weeks at Johnson Space Center, where Hadfield is doing his rehabilitation. [Hadfield Hits: How To Shave In Space | Video]

"He's doing basically as expected in the aspects of balance, walking and strength," Kuyumjian told SPACE.com nine days after Hadfield landed. The major focus in the first few days was ensuring Hadfield's balance, blood flow and cardiovascular health, he said.

Notably, Hadfield's first press conference took place as he sat down. That's a custom NASA adopted for all astronauts after Heidemarie Stefanyshyn-Piper briefly collapsed while standing during a press conference following shuttle mission STS-115 in 2001, Kuyumjian said. (It was a temporary problem associated with re-adapting to gravity.)

Hadfield had to adapt other Earthly activities to suit his condition, too. His first few showers took place while sitting in the bathtub. Under his clothing, Hadfield briefly sported a G-suit to make sure blood pressure got to his head.

The former flight pilot is also grounded from that most ordinary of human adult acts: driving. Hadfield and all long-duration spaceflight astronauts can't get behind the wheel until 21 days after landing.

Looking ahead to one-year flight

In 2015, NASA astronaut Scott Kelly and Russian cosmonaut Mikhail Kornienko will visit the International Space Station for an entire year. A typical ISS stay is about five to six months.

Only four humans (all Russian) have ever ventured into space for a year or more, with Valery Polyakov holding the record at 437 days. A one-year spaceflight hasn't been attempted since the late 1990s, though, when the Russian Mir space station was still in orbit.

Kuyumjian said there will be changes to health monitoring practices during upcoming year-long spaceflights, but how long it will take Kelly and Kornienko to recover is not well known. Perhaps the effects of microgravity level off after six months spent in space, or perhaps they become more severe, he said.

Previous lengthy flights "were dedicated to the medical aspect," Kuyumjian said, adding that the Russians had no major long-term issues. The challenge on the ISS, however, is astronauts spend hours a day doing experiments outside of medicine, he added.

NASA, the CSA and other agency partners are in continual discussions about how to proceed. More frequent testing of eye pressure in orbit is on the table, and perhaps other accommodations as well.

Kuyumjian further predicted that the scientists and doctors would talk more regularly about their findings.

"There are some questions we need to answer, and for that mission, the collaboration between medical and science will be much closer than it is now," he said. "We will be sharing a lot of data back and forth to answer questions."