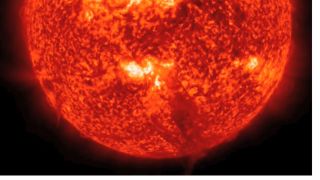 An intense M5.6-class solar flare erupts from sunspot region AR1515 on July 2, 2012 in this still from a NASA video by the Solar Dynamics Observatory.
(Image: © NASA)

The sun erupted with a powerful solar flare Monday (July 2) in an early solar fireworks display just in time for the Fourth of July. A wave of plasma from the flare could reach Earth by the U.S. Independence Day holiday on Wednesday, July 4.

The sun storm came from a large sunspot called AR1515 that is now rotating across the Earth-facing side of the sun. It unleashed an intense solar flare at 6:43 a.m. EDT (1043 GMT) today in what is expected to be one of several strong solar storms in the days ahead, space weather officials said.

The flare registered as a class M5.6 solar storm on the scale used by astronomers to measure the sun's weather. The sun's strongest storms come in three primary classes. The weakest storms are C-class flares, which have little effects that can be felt on Earth. M-class flares are moderate solar storms that can supercharge the Earth's northern lights displays.

The strongest solar storms are X-class events. When aimed at Earth, the most powerful X-class solar flares can endanger spacecraft and astronauts in orbit, interfere with satellite signals, as well as damage power lines and other infrastructure on the ground.

According to Spaceweather.com, a night sky observing and space weather tracking website run by astronomer Tony Phillips, the solar flare unleashed a wave of charged plasma called a coronal mass ejection (CME), but the particles were not aimed squarely at Earth.

"The eruption also hurled a CME into space, but not directly toward Earth. The south-traveling cloud could deliver a glancing blow to our planet's magnetosphere on July 4th or 5th," Spaceweather.com wrote.

Editor's note: If you snap a photo of sunspot AR1515 or any amazing northern lights photos this week and you'd like to share them for a possible story or image gallery, please send images and comments to managing editor Tariq Malik at tmalik@space.com.