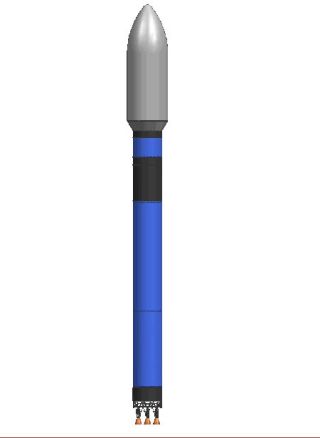 A key goal of SpaceX is developing a familyof launch vehicles intended to increase the reliability and reduce the cost ofaccess to space by a factor of ten.

According to a press statement detailingcompany plans, the Falcon 9 would be capable of launching approximately 21,000pounds (9,500 kilograms) to Low Earth Orbit (LEO) in its medium configurationand 55,000 pounds (25,000 kilograms) to LEO in its heavy configuration, a liftcapacity "greater than any other launch vehicle," the SpaceX statement said.

In the medium configuration, Falcon 9 wouldbe priced at $27 million per flight with a 12 ft (3.6 m) fairing and $35million with a 17 ft fairing.  Prices include all launch range and thirdparty insurance costs, making Falcon 9 the most cost efficient vehicle in itsclass worldwide.

But the company now explains that, inresponse to customer requirements for low cost enhanced launch capability,SpaceX has accelerated development of an EELV-class vehicle. Therefore it isupgrading Falcon 5 to Falcon 9.

The announcement today comes at a time when the companyhas yet to fly its Falcon 1 booster.

The maiden launch for Falcon 1 is now scheduled for fallof this year from the SpaceX island launch complex in the KwajaleinAtoll. A second Falcon 1 mission is slated to follow a classified launchof a Titan 4 booster from the Vandenberg Air Force Base in California.

Musk told SPACE.com that Falcon 9 is intended for three roles:

-Heavy LEOsatellites, which are mainly U.S. Department of Defense spacecraft.

"The prices we are showing do not accountfor reusability, so I'm hopeful that we will be able to reduce costssignificantly over time.  Also, this is still the first generation of ourpropulsion technology," Musk said. The SpaceX Merlin 2 engine will benefitfrom a very significant thrust upgrade and also be considerably cheaper perpound of thrust than Merlin 1, he said.

"As a result, the generation of rocketsbased on Merlin 2 will be much cheaper per unit mass to orbit than the Falconline, which is based on Merlin 1," Musk said.

Musk noted that the goal of SpaceX is tomake Mars colonization affordable.

That means growing to super-heavy 100-pluston lift, super-cheap and super-reliable launcher, Musk said. "Falcon 1was the first step and Falcon 9 is the second step."