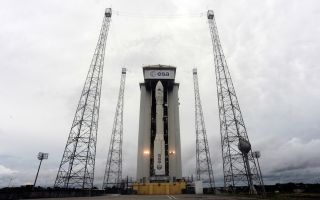 The new Vega rocket from Europe may be small, but it promises to do the job of at least twice that of most other rockets its size.

The European Space Agency's (ESA) first Vega rocket is now fully assembled on its launchpad at Europe's spaceport in French Guiana, on the northern Atlantic coast of South America. Vega's maiden launch, dubbed VV01, is expected to occur on Feb. 13. The launch window extends from 5:00 a.m. to 7:00 a.m. EST (1000 to 1200 GMT).

The Vega rocket is named after the second-brightest star in the northern hemisphere. The booster stands about 100 feet (30 meters) tall and 10 feet (3 m) wide, and weighs a total of 137 metric tons at liftoff. The rocket is made up of four stages — three solid-propellant stages and a fourth stage, called AVUM, that carries the payload.

Vega is designed to be a small launcher, complementing the existing fleet of medium-size Soyuz rockets and the larger Ariane 5 boosters that already launch from French Guiana.

While there is a growing trend toward larger satellites, there is still a need for small launchers to place 660 to 4,400-pound (300 to 2,000-kilogram) satellites into orbit — typically on scientific and Earth-observation missions. [Photos: Meet Vega, Europe's New Rocket]

"Vega will complete the possibilities for space launch for Europe," Antonio Fabrizi, director of launchers at ESA, told SPACE.com.

Unlike most small rockets, Vega is able to place multiple payloads into different orbits. The rocket is capable of handling payloads ranging from a lone satellite up to one main satellite plus six microsatellites — ones that are about 22 to 220 pounds (10 to 100 kg) in size. Overall, Vega can launch a payload mass ranging up to about 5,500 pounds (2,500 kg).

"Vega demonstrates new technology that might get considered when evolving Ariane launchers or even totally new launchers," Fabrizi said.

The inaugural Vega flight will carry nine satellites into orbit. These include:

Vega's fourth stage, AVUM, will first reach a circular orbit at an altitude of 900 miles (1,450 kilometers) to release LARES. It will then maneuver to as low as 217 miles (350 km) before deploying the other satellites.

"Once we've demonstrated that we can serve many different types of missions, I expect we should have a market of two to three launches per year," Fabrizi said.

The Vega launch can be watched live via ESA's webcast here or see live countdown updates from Spaceflight Now. Follow SPACE.com for the latest in space science and exploration news on Twitter @Spacedotcom and on Facebook.