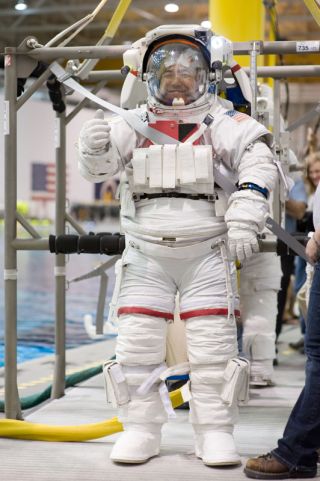 Dressed in a training version of his Extravehicular Mobility Unit spacesuit, Japan Aerospace Exploration Agency (JAXA) astronaut Satoshi Furukawa, Expedition 28/29 flight engineer, is about to be submerged in the waters of the Neutral Buoyancy Laboratory near NASA's Johnson Space Center as part of the training for his upcoming space station mission.
(Image: © NASA)

As Japan reels from the disastrous earthquake and tsunami that struck earlier this month, one of the country's astronauts is soldiering on with training for his upcoming mission to the International Space Station.

"Our thoughts and prayers are with those that suffer a great deal of damage from the big earthquake in Japan," Japanese astronaut Satoshi Furukawa, 46, said in a mission briefing today (March 21) at NASA's Johnson Space Center in Houston. "We are with you. People all over the world are with you."

Furukawa, who represents the Japan Aerospace Exploration Agency (JAXA), is training to launch on a six-month mission to the International Space Station on May 30. He will be accompanied by two crewmates – NASA astronaut Mike Fossum and Russian cosmonaut Sergei Volkov – when he blasts off aboard a Russian Soyuz spacecraft.

The space missions comes as Japan works to recover from a 9.0-magnitude earthquake, which struck the country on March 11 and triggered a tsunami that devastated much of the country's northeastern coast. [Photos: Japan Earthquake and Tsunami in Pictures]

"I'd like to do whatever I can to contribute to science for those that have suffered from the damage, and all the Japanese [people], all the people all over the world," Furukawa said.

The massive earthquake and tsunami forced JAXA to evacuate its Tsukuba Space Center in Tsukuba, Japan. The space center includes a control room for part of the International Space Station that oversees the Japanese Kibo laboratory at the orbiting outpost, and coordinates JAXA's unmanned cargo ships that ferry supplies to the space station.

The agency's flight controllers were sent home safely on March 11, but the center sustained some damage from the earthquake.

Furukawa said he lost some acquaintances in the tragic natural disaster, and lamented the fact that tens of thousands of people in Japan lost their homes and are now struggling to recover and rebuild.

Furukawa's crewmates, Fossum and Volkov, have also been doing their best to provide support and comfort.

"We've mostly been giving him a bit of room," Fossum said. "Especially in the first days after the disasters struck, he was hungry for news of his family, friends and colleagues. So, we've been a sympathetic ear, but he's more hungry to get the news, so we give him a bit of space. It's kind of the same thing we do on orbit – that time that you have to cope with personal things."

Furukawa is from Yokohama in Japan's Kanagawa Prefecture and was trained as a medical doctor and surgeon prior to his training as an astronaut. This upcoming Soyuz flight will be his first trip into space, and he is looking forward to his months-long stay at the orbiting outpost after many years of training, he said.

"I'm looking forward to performing scientific experiments from doctors' and scientists' point of view," Furukawa said. "I am very excited about everything during the mission. I've been training for 12 years – in other words, I dedicated one fourth of my life to astronaut training, so I'm really looking forward to the mission."

Furukawa said he is also looking forward to gazing at the Earth from orbit, and he plans to take many pictures of the planet, which he will share with the public via Twitter (Furukawa's name on Twitter is @Astro_Satoshi).

Fossum, Furukawa and Volkov will launch in their Soyuz vehicle from the central Asian spaceport of Baikonur Cosmodrome in Kazakhstan on May 30. Furukawa, Fossum and Volkov are three of the six crewmembers who will make up the Expeditions 28 and 29 missions to the space station.

With most of the station's construction now complete, the trio's main mission objectives will be to carry on the plethora of crucial science experiments conducted aboard the laboratory, Fossum said.

For Fossum, who has journeyed to the space station twice on two previous space shuttle missions, he is most looking forward to spending time on the massive structure that he helped assemble.

"It's been a great partnership and a great benefit to us all," Fossum said. "All of this working for all these years, I helped build it, I helped design it in some ways … and now I get to live on it, not just visit.