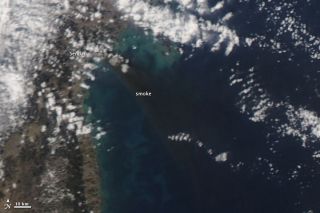 This image from NASA's Aqua satellite shows a major fire raging near the coastal city of Sendai in northeastern Japan after the massive 8.9-magnitude earthquake that struck on March 11, 2011. This image was taken by Aqua's MODIS instrument on March 12.
(Image: © MODIS Rapid Response Team/NASA GSFC)

NASA satellites have snapped new pictures of the devastating floods and fires in Japan from the deadly earthquake and tsunami that struck the country on Friday (March 11).

Photos from NASA's Earth-watching Terra and Aqua satellites paint a stark picture from above of the damage by the massive 8.9-magnitude earthquake and the subsequent tsunami it spawned. They show Japan's northern region, particularly the city of Sendai – which is visible inundated by floodwaters and fires in the satellite views.

The images were taken today (March 12) – one day after the natural disaster as part of NASA's MODIS Rapid Response system, which uses satellites to provide near real-time images of Earth's landmasses every day. The system can snap photos of Japan twice a day, NASA officials said. [Japan Earthquake and Tsunami in Pictures]

The photo from NASA's Aqua satellite was taken at 2:46 p.m. Local Japan Time and shows a dark plume of smoke emanating from the Sendai region. The black smoke can be seen blowing far out to sea. Scientists used the Aqua satellite's Moderate Resolution Imaging Spectroradiometer, or MODIS, to generate the photo-like view.

"Clouds prevented MODIS from identifying the location of the fire within the city, however this type of black smoke usually originates from oil or gas files," wrote NASA's Holli Riebeek of the agency's Goddard Space Flight Center in a statement. According to news reports, a refinery was set ablaze in the Sendai region after the earthquake struck. [Aqua satellite photo of Japan quake aftermath]

The Aqua satellite image also shows clouds of blue and green sediment along the coastline of Japan, which may be mud or other debris churned up by the powerful tsunami waves, NASA officials said.

The floodwaters appear in dark blue or black and stretch well inland of the coastline when compared with another Terra image taken on Feb. 26, before the earthquake.

"MODIS detected a fire burning near the shore north of Sendai," Riebeek wrote, adding that the fire is noted with a red box in the image. "It is also surrounded by floods."

The March 11 quake was the largest ever recorded in Japan and is the world's fifth largest earthquake to strike since 1900, according to the U.S. Geological Survey (USGS).

The epicenter of the earthquake was 231 miles (373 kilometers) northeast of Tokyo and 80 miles (130 km) east of Sendai, Honshu, according to the USGS.