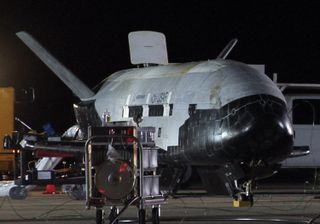 Despite its robotic nature, the X-37B space plane received a warm welcome from Air Force crews at Vandenberg. Here, the vehicle appears to be undergoing safing procedures after landing on Dec. 3 at 1:16 a.m. PST (0916 GMT). Significant weathering, or discoloration, can be seen on the spacecraft's upper thermal blanket insulation.
(Image: © USAF/Vandenberg Air Force Base)

The U.S. Air Force's secretive X-37B space plane is poised to launch on its second mission Friday (March 4), though what exactly it will be doing once it leaves the ground remains a mystery.

The robotic X-37B mini-shuttle is slated to lift off from Cape Canaveral, Fla., on Friday atop an Atlas 5 rocket, weather permitting. Its launch window opens at 3:39 p.m. EST (2039 GMT), according to the launch provider United Launch Alliance, which is overseeing the flight.

The first X-37B spacecraft launched in April 2010 and returned to Earth in December after an apparently successful test flight, though the details of that mission – like this upcoming flight – are classified. The first X-37B mission lasted 225 days. [Photos: First Flight of the X-37B Space Plane]

With its blunt nose and stubby wings, the unmanned X-37B spacecraft resembles a miniature version of NASA's space shuttles. The vehicle was originally developed as part of a NASA project that was shifted to the military when funding ran dry.

The spacecraft is about 29 feet (almost 9 meters) long and 14 feet wide (nearly 4.5 meters), with a payload bay about the size of a pickup truck bed. It is designed to launch vertically inside the nose cone of a rocket, stay in orbit for months at a time, and then land horizontally on a runway like a space shuttle.

But unlike NASA's shuttles, the X-37B space plane does everything autonomously. It also has a solar array that is deployed from its payload bay to generate power during its months-long stay in orbit [Infographic: The X-37B Space Plane]

"There is no one on the ground with a joystick flying it," Lt. Col. Troy Giese, X-37B program manager in the Air Force Rapid Capabilities Office, said before the first X-37B mission blasted off last year.

Air Force officials have not said much about first X-37B mission, and they're been similarly tight-lipped about the upcoming second flight with the OTV-2 vehicle.

But the Air Force has said that the X-37B spacecraft should help the Air Force test and demonstrate new technologies — such as guidance, navigation and control systems — that could be used on future satellites.

The secrecy surrounding the X-37B has led to some speculation that the plane could be a space weapon of some sort. But Air Force officials have repeatedly denied that charge, and some experts have postulated that it is a platform for space reconnaissance.

The X-37B is built by Boeing's Space and Intelligence Systems division. It can fly long, extended missions because of its solar array power system, which allows it to stay in orbit for up to 270 days, Air Force officials have said.

Originally, NASA used the space plane as an experimental test bed until funding for the project ran out in 2004.