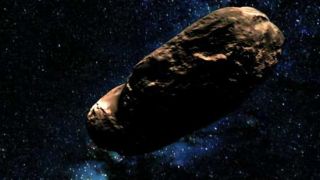 SEATTLE – A 2008 book cast doubt on the longstanding belief that William Herschel is the person who coined the term "asteroid." But a new study concludes the credit indeed goes to the great English astronomer.

In his book "The Age of Wonder," Richard Holmes argued that a contemporary of Herschel's, philologist Stephen Weston, came up with the word and offered it to Herschel. But the new research found that the word had been coined before Weston could have suggested it. [Image Gallery: Asteroids]

Naming a new class of objects

When Ceres was discovered in 1801 and 2 Pallas was detected the next year, both space rocks were thought to be planets. But Herschel, one of the most eminent astronomers of his day, believed they belonged to a new class of space object, Cunningham said.

In 1802, the German-born Herschel set out to find a name for these space rocks. He enlisted the help of some friends. One of them, William Watson, offered many suggestions — including planeret, planetel, planetule, planetkin and planetling. Herschel nixed them all, probably because he didn't want to extend the rocks' association with planets, Cunningham said.

Herschel then turned to a real bigwig: Sir Joseph Banks, president of the Royal Society and a famed naturalist and botanist. Banks had decades of experience creating  terminology for newly discovered plants and animals. During Captain Cook's great voyage of discovery from 1768 to 1771, for example, Banks collected and described many species new to science.

Weston gets in the game

It is likely Banks got many such requests, Cunningham said, noting that Erasmus Darwin — Charles' grandfather — also asked Banks for nomenclatural aid in 1781.

"Banks was regarded as the expert, the person to turn to," Cunningham said.

But Banks was a very busy man, and he decided to delegate the job of helping Herschel.

"So he farms it out to Stephen Weston, who is the pre-eminent philologist in England," Cunningham said. Phililogists study the historical use of language.

Holmes' book makes the case that Weston came up with "asteroid," which is derived from the Greek for "star-like." But Cunningham dug into the chronology — looking at letters to and from many of the major players in this etymological drama — and determined that Holmes' scenario could not have happened.

Watson gave Herschel his list of unacceptable names in April 1802, the word "asteroid" was coined in May, and  Weston didn't make his suggestions until June, Cunningham asserted.

"Asteroid” made sense: The space rocks often looked like little points of light when seen through the telescopes of the day. [5 Reasons to Care About Asteroids] Still, Cunningham’s chronology suggests Herschel wasn't entirely satisfied with the term and was hoping a better alternative would come along.

"But nothing better did," Cunningham said. "So we are left with the word 'asteroid.'"

Herschel's contemporaries may have been even less impressed with the term than he was. Cunningham cited a letter to Herschel from Giuseppe Piazzi, the Italian astronomer who had discovered Ceres (now classified as a dwarf planet).

"And for the naming, could one not call the little planets 'planetoids'?" Piazzi wrote.