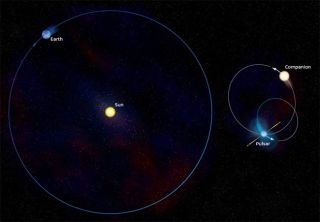 Pulsars are like cosmic lighthouses sending out sweepingbeams that blink at us across the galactic expanse. Now scientists have spotteda wacky pulsar that doesn?t behave exactly like its fellows: Instead of circlinga white dwarf star, this one orbits a sun-like star along an oval path.

All other known pulsarsthat rotate as quickly as this one seem to have picked up speed by pulling offmass from a companionstar that has reached the advanced stage of red giant, when its gaseouslayers bloat out prior to the end-stage of life as a very compact, dim, whitedwarf.

"The fact that it's around a sun-like star isfascinating because if that is the companion to this pulsar, then it certainlydidn?t accrete matter from that star ? it hasn't been a red giant yet,"said David Champion, an astronomer at Canada's McGill University.

To account for this odd duck, called PSR J1903+0327,scientists have concocted a few new ideas, including the possibility that thepulsar originated in a globular cluster with a different companion, but waskicked out by a near-miss with another star.

"The reason why we're so excited about this is theimpact it might have on our understanding of where the pulsars that we look atare coming from," Champion told SPACE.com. "We've never seenanything like this before."

Champion and his colleagues detail their findings in the May15 issue of the journal Science.

Pulsars are thought to form when a massive star reaches theend of its life and explodes in a supernova. The remnants of these starssometimes collapse into neutron stars, so-called because they are so dense thatthe protons and electrons that formed the star's atoms have been squashed intoneutrons (if the original star was even more massive, it would collapse into ablack hole).

Not only is the star's matter tightly-packed after all thissquashing, but the star's magnetic field is compressed into a tiny space aswell. Scientists think this powerful field accelerates charged particles aroundthe star, causing them to emit radiation that is focused into a beam by themagnetic field lines.

As these neutron stars rotate, so too do their light beams.If a neutron star happens to be shooting out its jet in our direction, we callit a pulsar, because we see a pulse every time the rotating beam reaches us.

Usually, pulsars slow down in their rotation over time asthey lose energy. When one attains a speed as fast as PSR J1903+0327, whichrotates every 2.15 milliseconds, scientists think it has "recycled"itself by sucking up mass from a companion red dwarf. When this happens,scientists usually see a quickly spinning pulsar orbiting around a white dwarf(the end stage of a red giant) in a circular orbit (the red giant's tidalforces stabilize the pulsar's orbit into a circle).

"This new pulsar is quite a surprise," Championsaid, referring to the new object's oblong orbit around a sun-like star.

The scientists speculate that the strange pulsar may havestarted out in a globular cluster, where stars are much closer to each otherand interact more often than in the rest of the galaxy. In this case, it wouldhave originally gone through the normal recycling process, but lost its agedred giant companion when a younger sun-like star came flying in and knockedit away.

Another hypothesis is that the pulsar originated in a triplestar system, but its main red giant companion was destroyed.

The team hopes further study of this unique object will helpsolve the mystery and teach us more about how pulsars form.

"It's always the most unusual objects that advance ourunderstanding the most in these cases," Champion said.