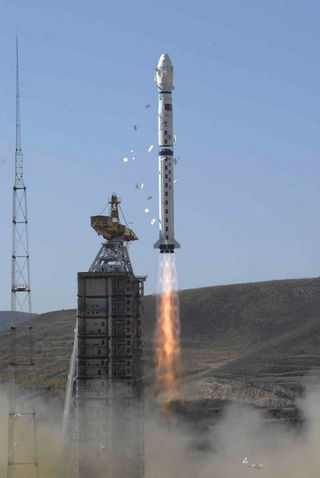 Called Remote SensingSatellite-1 in reports by the state-run Xinhua news agency, the nearly6,000-pound (2,721-kilogram) spacecraft was launched from the Taiyuan launchcenter in the highlands of northeastern China's Shanxi province. The Long March4B rocket lifted off 6:48 p.m. EDT at (2248 GMT), or just after sunriseThursday morning at the launch site.

The launcher's threeliquid-fueled stages injected the payload into its planned orbit, Xinhua said.The payload was likely released into a near-polar orbit some 375 miles (603 kilometers)high.

Official media reports saidthe satellite was largely developed by the Shanghai Academy of SpaceflightTechnology. Objectives of the craft's mission include a slate of scientificexperiments, land and agricultural surveys, and disaster monitoring, accordingto Xinhua.

Several more launches arescheduled for later in the year with research and communications satellites,said a Chinese space official quoted by Xinhua. Wednesday evening's flightmarked the 15th space launch of the year to reach orbit from locationsworldwide.

China claims the liftoffmarked the 47th consecutive successful space launch dating back to October1996. It was the first launch for the nation's space program since the two-manShenzhou 6 capsule conducted its five-daymission last October.

The next crewed missioncould occur in September 2008 near the time of that year's Summer Olympics inBeijing, according to officials cited by state media. That flight - called Shenzhou7 - will carry threeastronauts and could attempt the country's firstspacewalk.