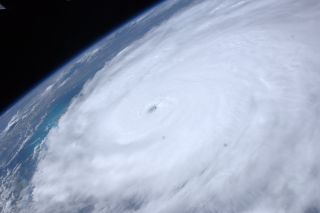 Hurricane Irene is bearing down on the U.S. East Coast and has turned into a frightening storm, according to an astronaut on the International Space Station.

NASA astronaut Mike Fossum said that Hurricane Irene, like all hurricanes, looks "terrifying from above," and its evolution into a major storm this week has been unmistakable from orbit.

"We saw a big change in the structure of the storm over the several days that we've watched her, especially yesterday," Fossum told SPACE.com today (Aug. 25) during a video interview from space.

Hurricane Irene is currently a Category 3 storm with winds of 115 mph (185 kph) that is battering the Bahamas. Space station astronauts and satellites have kept a constant watch on the growing storm. [Photos: Hurricane Irene Views From Space]

The storm is expected to hit the North Carolina coast on Saturday (Aug. 27) and follow the coastline north, where it may make landfall on Long Island, posing a threat to New York City, according to OurAmazingPlanet, a sister site of SPACE.com.

Fossum, a native of Texas who has seen many hurricanes from the ground and space, said that two days ago the eye of Hurricane Irene wasn't as stable as it appears now. The storm has grown more organized and uniform as this week wore on, he added.

"There's kind of a dome shape to the whole thing, with the eye fully formed," Fossum said. "Yesterday you could see the eye wall and down into the eye itself. You know that is a powerful storm, and those are never good news when they're headed your way. So our prayers and thoughts are with the people in its path."

Fossum is one of six astronauts living aboard the International Space Station and is in the middle of a six-month spaceflight. His crewmate Ron Garan, also of NASA, has been posting photos of Irene from orbit each day as the space station has been flying over the huge storm.

NASA is also broadcasting live views of Hurricane Irene from the space station when the orbiting lab sails over the storm.