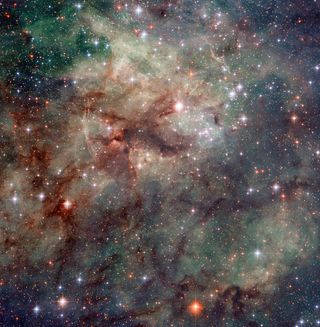 Hubble has taken this stunning close-up shot of part of the Tarantula Nebula. This star-forming region of ionised hydrogen gas is in the Large Magellanic Cloud, a small galaxy which neighbours the Milky Way.
(Image: © NASA/ESA)

What looks like a cosmic wonderland to some resembles a spindly space spider to others. The Hubble Space Telescope has just captured a new close-up picture of the famous object, known as the Tarantula Nebula.

The nebula is a vast star-forming cloud of gas and dust in our neighboring galaxy, the Large Magellanic Cloud. In this picture, we see a close-up of the Tarantula’s central region, glowing brightly with charged gases and young stars. [Spectacular Hubble Telescope Photos]

The wispy arms of the Tarantula Nebula were originally thought to resemble spider's legs, giving the nebula its name. The part of the nebula visible in this image from Hubble’s Advanced Camera for Surveys is crisscrossed with tendrils of dust and gas churned up by recent exploding stars, called supernovas.

These supernova remnants include NGC 2060, visible above and to the left of the centre of this image, which contains the brightest known pulsing star, or pulsar.

The tarantula’s bite goes beyond NGC 2060. Near the edge of the nebula, outside the frame, below and to the right, lie the remains of supernova SN 1987a, the closest supernova to Earth to be observed since the invention of telescopes in the 17th century.

Hubble and other telescopes have been returning to spy on this stellar explosion regularly since it blew up in 1987, and each subsequent visit shows an expanding shockwave lighting up the gas around the star, creating a pearly, necklace-like of glowing pockets of gas around the remains of the star.

Together with dying stars, the Tarantula Nebula is packed with young stars that have recently formed from the nebula’s supply of hydrogen gas.

These toddler-stars shine forth with intense ultraviolet light that energizes the gas, making it light up red. The light is so intense that although it's around 170 000 light-years away, and outside the Milky Way, the Tarantula Nebula is nevertheless visible without a telescope on a dark night to Earth-bound observers.

This nebula might be far away, but it is the most luminous example of its type that astronomers have observed in the local universe. [Most Amazing Hubble Discoveries]

A compact and extremely bright star cluster called RMC 136 lies above and to the left of this field of view, providing much of the radiation that powers the multi-colored glow. Until recently, astronomers debated whether the source of the intense light was a tightly bound cluster of stars, or perhaps an unknown type of super-star thousands of times bigger than the sun.

It is only in the last 20 years, with the fine detail revealed by Hubble and the latest generation of ground-based telescopes, that astronomers have been able to conclusively prove that it is, indeed, a star cluster.