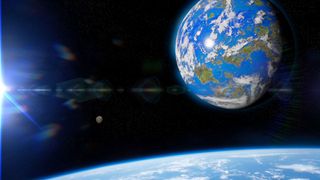 What would happen to life on Earth if the planet were supersized?
(Image: © Shutterstock)

For nearly four years, NASA's Kepler spacecraft whisked through space, surveying our corner of the galaxy. It monitored more than 150,000 stars, looking for planets about the size of Earth that belonged to other solar systems. The mission didn't disappoint; Kepler found countless examples of a type of planet known as a super-Earth.

These faraway planets might remind you of home — they're rocky, smaller than gas giants, located near their star and sport a relatively thin atmosphere. But they're way larger than the blue marble: These super-Earths are a honking two to 10 times bigger in mass than our Earth.

Because there are so many super-Earths out there, it begs the question: What would happen to our planet if it were two or even 10 times the size it is now?

Related: What if the Earth was flat?

It's possible that Earth and the other inner planets of our solar system were headed in that direction, Mickey Rosenthal, a doctoral candidate studying planet formation at the University of California, Santa Cruz, told Live Science. One theory is that the gargantuan planet Jupiter became so large that it cut off access to cosmic building blocks needed to make the inner planets bigger — effectively starving them, Rosenthal said.

No matter the reason for Earth's current size, there's no way to truly know what would happen to Earth if it were super. But scientists have some ideas based on what they've learned about our faraway cousins.

For starters, you'd be shorter — you, Mount Everest and every tree in California's Sequoia National Park — because if you increase the size of a planet and keep everything else identical, gravity increases, too. If Earth were twice its size, you'd be heavier, because the force of gravity increases as the planet's density and radius increase. It would take more energy to resist gravitational pull, so the structures we have today wouldn't be strong enough to stand as tall as they do now.

With a larger planet and stronger gravitational field, Earth would also experience more collisions, Rory Barnes, a theorist who studies planet habitability at the University of Washington, told Live Science. As a superplanet, Earth's greater gravitational pull would effectively attract more and larger asteroids, so "Armageddon-type" collisions would become more of a concern than they are now, Barnes said.

If the hypothetical super-Earth were even bigger, say, 10 times its current mass, dramatic changes could start happening in Earth's interior. The iron core and liquid mantle would also be 10 times larger, and with more gravity acting on a larger mass, the pressure beneath Earth's surface would increase. This high pressure could cause the iron core to solidify, Barnes said.

Our magnetic field "shields life on the planet from the nastiness of space," Barnes noted. Without it, charged particles flying through space, also called solar storms, could slam into Earth. And these tiny particles can cause all kinds of problems, including breaking up DNA and increasing the risk of cancer, he said.

Barnes also pointed out that a larger interior could make super-Earth more volcanically active than it is now. As the radius of the planet increases, there's more energy inside and fewer places for that energy to escape. More volcanic eruptions wouldn't be surprising, he said. Plate tectonics, too, would be different on a super-Earth. But the exact effect is still an open question. A larger mantle would also be hotter, possibly causing more vigorous convection currents that would push plates around more. In contrast, it's possible that under the high pressure, the crust would be totally fused together and plate tectonics wouldn't exist at all.

For Earth to be comparable, it would need to have an orbit of about 100 days, said Hilke Schlichting, an associate professor of astrophysics at the University of California, Los Angeles. That orbit might be habitable in systems with a star smaller than the sun, but if our Earth were that close to our sun, all of the water on the planet would vaporize, Schlichting said.

In other words, Earth would be out of the habitable zone and, in essence, would become a steam planet, she said.

Surprisingly, many of the super-Earths discovered so far seem to be water rich, like entire water worlds, Rodrigo Luger, the Flatiron Research Fellow at the Simon Foundation's Center for Computational Astrophysics in New York City, said in an interview. It's possible that these planets formed from large pieces of ice and then later migrated close to their stars, which prompted their ice to melt, he said.

However, these planets might not be habitable, since their deep oceans plummet to a solid ice layer. This ice is not formed by low temperatures, but by the intense pressure of the super-deep ocean, which forces water molecules into a solid state. This ice layer blocks any interaction between the atmosphere and the planet's interior, meaning there is no carbon cycle (a process in which carbon cycled through the atmosphere, ocean, and crust) or no mineral exchange (which regulates Earth's long term temperature via an interaction between atmosphere and the mantle), according to Luger. That doesn't promote habitability — at least for life as we know it.

The reality is that scientists have more questions about super-Earths than they have answers. And we don't fully understand the physics of our own interior, much less that of a planet many solar systems away, Luger said. We don't know what would happen if Earth were supersized or closer to the sun. But, so far, it seems very fortunate that we aren't living on a planet that's any of those things.

Editor's note: This story was updated to note that if Earth were twice its mass, gravity would increase, but not by twice as much. Also, to clarify that super-Earths are planets that are between two and 10 times the mass of our planet.