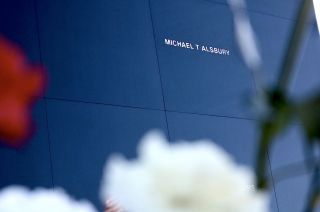 A name has been added to the U.S. national memorial for fallen astronauts, honoring the first commercial spacecraft pilot to die in the pursuit of opening spaceflight to the public.

Michael Alsbury was remembered on Saturday (Jan. 25) as his name was unveiled on the Space Mirror Memorial at NASA's Kennedy Space Center Visitor Complex in Florida. Alsbury died in 2014 during a test flight of Virgin Galactic's first SpaceShipTwo suborbital spaceplane.

A ceremony held by the Astronauts Memorial Foundation (AMF) included tributes from Alsbury's fellow SpaceShipTwo pilots Frederick "CJ" Sturckow and Doug Shane, as well as Commercial Spaceflight Federation chairman Taber MacCullum and former NASA astronaut Eileen Collins, who is a member of the AMF board.

Alsbury's name was revealed carved into one of the 90 polished black granite plates that form the memorial's surface. Like the 24 other names emblazoned on the monument, Alsbury's name, which was added to the lower right of the Space Mirror, glows by the light continuously projected from behind the 42.5-foot-tall by 50-foot-wide (13 by 15 meter) wall.

Alsbury died on Oct. 31, 2014, in the crash of Virgin Galactic's first SpaceShipTwo vehicle, the VSS Enterprise. The 39-year-old Scaled Composites' test pilot was serving as co-pilot on what was his ninth SpaceShipTwo flight when, according to the National Transportation Safety Board (NTSB), he prematurely deployed the spaceplane's feather braking mechanism.

Alsbury died and pilot Peter Siebold was severely injured as the vehicle broke apart over the skies of the Mojave Desert in California.

Recovering from the tragedy, Virgin Galactic made changes to the feather-deploy controls and moved construction of the next SpaceShipTwo to its own subsidiary, The SpaceShip Company. In 2018, the VSS Unity reached space for the first time, earning its pilot and co-pilot commercial astronaut wings from the Federal Aviation Administration (FAA).

Virgin Galactic is now nearing the start of commercial operations to fly tourists and scientists on suborbital spaceflights from Spaceport America in New Mexico.

Alsbury was the 20th person to die during a space mission or test flight, along with four Russian cosmonauts, 14 NASA astronauts and a U.S. Air Force pilot. The nine additional names on the Space Mirror represent U.S. astronauts and crew members on U.S. spacecraft who died during training or aircraft accidents.

The Astronauts Memorial Foundation, which maintains the Space Mirror, voted in July 2019 to include commercial or private astronauts on the memorial. Sturckow, a former NASA astronaut and current pilot for Virgin Galactic, assisted the foundation in developing new criteria that led to the addition of Alsbury to the monument.

"The AMF board feels Michael's contributions are worthy of remembrance, as he gave his life in the furtherance of the mission of space exploration," Collins said in a statement. "Michael's life story will be remembered by future generations and be an inspiration to those who seek to explore the unknown."

The Space Mirror Memorial does not include every U.S. astronaut who died in accidents while in service to U.S. efforts in space. The monument omits Apollo-era astronaut Edward Givens, who died in a car crash, and shuttle-era astronauts David Griggs, Patricia Hilliard Robertson and Stephen Thorne, who were lost in commercial or private aircraft accidents. The AMF limits the Space Mirror Memorial to astronauts who perished in U.S. government-sponsored missions or training activities.

The AMF, together with NASA, holds annual ceremonies at the Space Mirror to honor everyone who has died in the pursuit of space exploration. This year's NASA Day of Remembrance public event is scheduled for Thursday (Jan. 30).