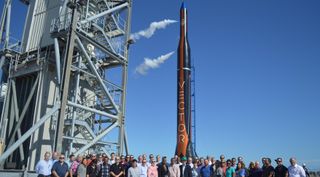 Two days after the Air Force announced it was awarding Vector a launch contract, the company replaced its CEO amid reports the company had closed its three facilities.
(Image: © Vector)

"Jim Cantrell is no longer with Vector effective today. John Garvey has assumed the role of CEO," a company spokesperson told SpaceNews Aug. 9. The company provided no reason for Cantrell's removal or other information about the status of the company.

In a statement issued late Aug. 9, the company said financial issues forced the company to suspend its operations as it seeks to find a way to complete development of its Vector-R small launch vehicle.

"In response to a significant change in financing, Vector Launch Inc (Vector) announced today that it is undertaking a pause of operations," it stated. "A core team is evaluating options on completing the development of the company's Vector-R small launch vehicle." That team will also support other work, like a recently awarded Air Force launch contract, the company said, promising more details next week.

The statements came after industry rumors and social media posts earlier in the day suggesting serious problems at the company. One employee reported that the company’s three offices — in Tucson, Arizona; Huntington Beach, California and San Jose, California — had been closed, affecting at least 150 employees.

Today I went to work. I was running about 20 minutes later than normal. I was excited to stay late and get work done. It was my dream job. I moved across the country to live my dream of working on rockets.Today, that dream ended.August 9, 2019

"We weren't really told much," said Madison Telles, an engineer at Vector, in a series of tweets, saying she and others were taken by surprise. "We had a great concept and great team of people behind it, but things fell through I guess."

Industry sources claim that one of Vector's largest venture capital backers, Sequoia, withdrew its funding for the company. Sequoia did not immediately respond to a request for comment, nor did Cantrell or Garvey.

The company found success raising capital from funds like Sequoia. The company announced in October 2018 a $70 million Series B round, and had raised a total of about $100 million.

After performing a pair of low-altitude suborbital test flights, Cantrell said in early 2018 that he expected the first launch of the Vector-R rocket to take place before the end of the year. However, the company has yet to attempt an orbital launch. Company officials said earlier this summer that they were planning at least another suborbital test flight from Pacific Spaceport Complex – Alaska on Kodiak Island, Alaska, later this year.

In a June 12 statement announcing the hiring of Stephanie Koster, a former Blue Origin executive, as chief financial officer, the company said it now “dedicates focus” on an orbital launch attempt from Alaska later this year.

The shakeup at Vector comes only two days after the company won a launch contract from the U.S. Air Force. The $3.4 million contract for the Agile Small Launch Operational Normalizer (ASLON)-45 mission falls under the Small Rocket Program-Orbital (SRP-O) program run by the Space and Missile Systems Center’s launch enterprise experimental division at Kirtland Air Force Base. The ASLON-45 mission, scheduled for launch in the third quarter of 2021 from Wallops Island, Virginia, will carry multiple three-unit and larger U.S. government cubesats to a 45-degree low Earth orbit.

Caleb Henry contributed to this article from Washington. This story was provided by SpaceNews, dedicated to covering all aspects of the space industry.