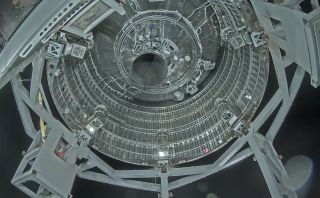 SpaceX founder and CEO Elon Musk posted this image of the SN4 Starship prototype, with its single Raptor engine, on the test stand in South Texas on May 3, 2020.
(Image: © Elon Musk via Twitter)

A new photo shows just how big SpaceX's Starship Mars-colonizing vehicle will be.

SpaceX founder and CEO Elon Musk tweeted an image Sunday (May 3) looking up at the belly of the latest Starship prototype, the SN4, which is on the test stand at the company's South Texas site. The shot shows the SN4's single Raptor engine, looking extremely lonely in the center of a 30-foot-wide (9 meters) expanse.

As Musk noted, the Raptor will get a workout soon, in the form of a "static fire" test, during which the engine will blaze while the rocket is tied down. Indeed, SpaceX aimed to perform the engine test Sunday night but called it off because the Raptor's liquid methane propellant got too warm, Musk explained in another tweet. The next attempt will come soon, likely sometime today (May 4).

If the static fire goes well, SpaceX will start gearing up for an uncrewed test flight with the SN4, taking the prototype about 500 feet (150 m) into the South Texas skies.

Future prototypes will go much higher. For instance, the SN5 will have three Raptors, and SpaceX wants to send that vehicle about 12 miles (20 kilometers) up, Musk has said.

The final Starship will be more powerful still, boasting six engines. The 165-foot-tall (50 m), 100-passenger craft will be capable of blasting itself off the surface of the moon and Mars, Musk has said.

But Starship will need help breaking free of our planet's gravitational grip. So it will launch off Earth atop a giant rocket called Super Heavy, which will be powered by dozens of Raptors. (In earlier designs, Super Heavy could boast 37 engines. But Musk recently tweeted that the rocket will be powered by "only" 31 Raptors.)

Both Super Heavy and Starship will be fully reusable, potentially slashing the cost of spaceflight enough to enable the colonization of Mars, Musk has said. And the Red Planet isn't the pair's only exploration target; the moon is also in play. For example, NASA just awarded SpaceX a contract to develop Starship as a lunar lander, to ferry astronauts to the moon's surface for the agency's Artemis program, which aims to land humans in 2024.

Two other industry groups got similar human-lander contracts: Alabama-based Dynetics and a team headed by Blue Origin, the spaceflight company led by Amazon.com founder Jeff Bezos. Not all of the privately developed landers will necessarily end up flying NASA astronauts; the agency will assess the designs and decide which ones to continue funding. Ultimately, NASA will choose from among the vehicles that make it through to operational flight, purchasing landing missions as transportation services.