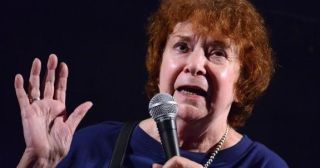 "Star Trek" writer/producer Dorothy Catherine "D.C." Fontana has died at the age of 80 following a brief illness, according to StarTrek.com.

Fontana is best known as one of Star Trek's foundational writers, working with creator Gene Roddenberry on the original series and establishing key franchise elements such as Vulcan culture. She wrote 10 episodes of the original series, and was its story editor. She was brought back for "Star Trek: The Next Generation," co-writing the pilot with Roddenberry and going on to solo write episodes of that series and "Deep Space Nine."

Other shows Fontana wrote for include "Babylon 5," "Ben Casey," "Bonanza," "The Six Million Dollar Man," "Logan's Run," "He-Man & The Masters of the Universe," and "Beast Wars: Transformers." Most recently she was a senior lecturer at the American Film Institute.

She is survived by her husband Dennis Skotak.