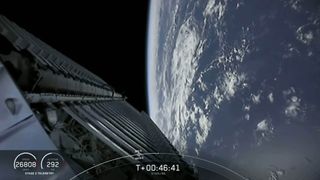 Space.com's first launch of 2020 sent 60 Starlink satellites into orbit on Jan. 6. The company plans to launch 60 more on the Starlink-3 mission this week.
(Image: © SpaceX)

CAPE CANAVERAL, Fla. — SpaceX has fired up the rocket booster that will ferry the company's fourth batch of Starlink satellites into space.

Just over 24 hours after SpaceX aced an in-flight abort test of its Crew Dragon spacecraft, the company conducted a static-fire test of a Falcon 9 rocket at Space Launch Complex 40 at Cape Canaveral Air Force Station in Florida, the company said on Twitter. That rocket was expected to send 60 Starlink internet satellites into space no earlier than Tuesday (Jan. 21), but SpaceX is now targeting launch for Friday, Jan. 24, at 10:54 a.m. EST (1554 GMT).

The Falcon 9 rolled out of its hangar early Monday morning (Jan. 20) and went vertical on the launch pad in advance of a planned test-firing of its nine first stage engines that same day. The two-stage rocket was slated for liftoff on Tuesday morning, in what would be the third launch of the year from Cape Canaveral. However, due to rough weather conditions SpaceX has not yet finalized the launch date.

But before SpaceX can launch the new Starlink fleet, the company wanted to make sure the Falcon 9 is up for the task and put the vehicle through a routine launch rehearsal.

Monday's brief test, known as a static-fire test, is a standard part of prelaunch procedures and one of the last major milestones before liftoff. During the test, teams loaded the Falcon’s super-chilled propellants — kerosene and liquid oxygen — into the rocket before igniting the first stage’s nine Merlin 1D engines.

The engines briefly fired at 2 p.m. EST (1900 GMT), generating more than 1 million pounds of thrust while the booster remained firmly on the ground. SpaceX confirmed the test was completed, but didn’t immediately set a launch date and time.

"Static fire of Falcon 9 complete ahead of launching 60 Starlink satellites," SpaceX tweeted shortly after the test. "Due to extreme weather in the recovery area, team is evaluating best launch opportunity."

Static fire of Falcon 9 complete ahead of launching 60 Starlink satellites. Due to extreme weather in the recovery area, team is evaluating best launch opportunityJanuary 20, 2020

It was rough seas threatened to keep SpaceX's Crew Dragon grounded over the weekend. In fact, Sunday's in-flight abort launch was delayed 24 hours due to rough seas at the landing site. SpaceX intentionally destroyed one of its veteran Falcon 9 rockets, so it wants to make sure it can safeguard this one.

As soon as the company is able to properly assess the weather, the California-based spaceflight company will finalize the launch date.

When it does fly, this will be the second in a matter of days for SpaceX. The company’s previous mission featured a thrice-flown Falcon 9 booster soaring for the fourth time as it carried a Crew Dragon capsule high in the sky.

The test, called an in-flight abort (IFA) test, was the last major hurdle SpaceX needed to clear before Crew Dragon can begin to carry astronauts to and from the International Space Station (ISS). It was designed to test the craft's SuperDraco-powered abort system, which will pull the capsule free of its launcher in the event of an emergency during flight.

By all appearances, Sunday’s test seemed to go off without a hitch, but the teams are reviewing data to make sure nothing out of the ordinary occurred that didn’t show up on telemetry.

Now, the company is gearing up to loft a fourth batch of Starlink satellites, on a Falcon that has already flown two successful missions. The rocket, dubbed B1051.3 (an internal SpaceX identifier), previously hoisted a Crew Dragon capsule as part of the company’s uncrewed mission to the space station (Demo-1) as well as a trio of Earth-observing satellites for Canada.

This next flight will mark the third launch of the year from the Cape. Tucked in the rocket’s nose cone is SpaceX's fourth batch of Starlink satellites, which are designed to provide global internet access.

The company launched its first group of 60 in May of last year, followed by an additional 60 in November, and an additional 60 earlier this month. SpaceX plans for its burgeoning constellation to eventually be more than 40,000 satellites strong. Tuesday's launch will bring the current number of satellites up to nearly 240. The company is already operating the largest satellite constellation in the world as of its third launc earlier this month.

Musk said SpaceX will need at least 400 Starlink satellites in orbit for "minor" broadband coverage, and 800 satellites aloft for "moderate" coverage. With roughly half a dozen more launches, the company claims it could begin offering broadband service in the United States sometime in 2020.

Editor's note: This story has been updated with a new launch time for SpaceX's Starlink-3 mission.