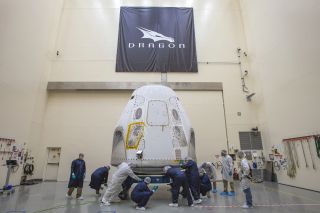 It's unclear when the quartet's mission will launch. It will follow SpaceX's first-ever crewed mission, a test flight called Demo-2 that will carry NASA astronauts Bob Behnken and Doug Hurley to and from the ISS. Demo-2 is scheduled to launch in mid- to late May.

Crew Dragon has already visited the orbiting lab once, in March 2019 on an uncrewed mission called Demo-1.

SpaceX holds a $2.6 billion NASA contract to fly six operational ISS missions with Crew Dragon and the company's Falcon 9 rocket. Boeing holds a similar deal, worth $4.2 billion, which the aerospace giant will fulfill using a capsule called the CST-100 Starliner.

But Starliner isn't yet ready to carry astronauts to orbit. The capsule suffered several software issues during its version of Demo-1, called Orbital Flight Test (OFT), this past December. Starliner ended up getting stranded in too low an orbit and came down to Earth without rendezvousing with the orbiting lab.

NASA has not yet announced whether it will require Boeing to fly another version of OFT or allow the company to proceed directly to a crewed test flight.