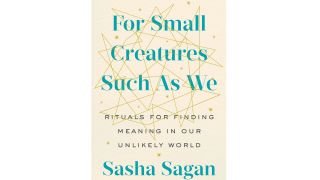 In her new book, "For Small Creatures Such as We" (G.P. Putnam's Sons, 2019), Sasha Sagan, daughter of "Cosmos" co-writer Ann Druyan and astronomer and science communicator Carl Sagan, explores the worlds of ritual and tradition from a scientific viewpoint.

Sagan is non-religious, much like her science-minded parents. When she became a mother, she wanted to find a way to incorporate ritual and tradition into her family in a way that, instead of religion, reflected her passion for space, science and nature. In this book, she explores ways that families might do that and how we can remind ourselves to be in awe of the world and universe around us.

In an excerpt below, you can read about one of Sagan's early memories with her dad in the introduction for the book.

For those who might prefer to listen, you can also find below an audiobook excerpt of the same passage.

(You can also read about Sagan's new book here.)

Excerpt from "For Small Creatures Such as We,"

“I am a deeply religious nonbeliever . . . This is a somewhat new kind of religion”

“A life without festivity is a long road without an inn.”

When I was little and my dad was alive he would take me to see the dioramas at the American Museum of Natural History in Manhattan. This was a holy place for me, grand and full of answers to deep and ancient questions. It filled me with awe. But it also frightened me. I would hide behind my dad’s legs, nervously stealing peeks at the frozen animals.

“That one just moved!” I would squeal.

“No, sweetie, it’s your imagination. They can’t move,” my dad would tell me.

This was a foggy and vague concept at the time. Foggier even than it is now. I could see the bears and gazelles, but in some larger way they were not really there. I knew that my dad was deeply committed to accuracy. I knew he had more information on the topic of dioramas than I did, so I could probably take him at his word; they were not moving. And yet my mind played tricks on me.

"Will you ever see them again?"

As we continued among the other exhibits—bright sharp gems, early human and dinosaur skeletons, Neanderthal tools, gold Aztec figurines, Yoruba masquerade costumes—all sacred artifacts in the temple of history and nature, this mystery of death followed me. And I wondered about it a lot: what it meant, what exactly it was, what I was supposed to do with the knowledge of its existence.

“It’s dangerous to believe things just because you want them to be true.”

That’s what my dad told me, very tenderly, not much later. I had asked him why I had never met his parents. He told me it was because they were dead.

“Will you ever see them again?” I asked.

The animals in the dioramas were dead, but we could still see them.

He told me that he’d like nothing better in the whole wide world than to see his parents again, but he had not seen evidence to prove he would. No matter how tempting a belief was, my father preferred to know what was true. Not true in his heart, not true to just him, not what rang true or felt true, but what was demonstrably, provably true. “We humans have a tendency to fool ourselves,” he said. I thought about the dioramas again. He was right. They hadn’t been moving, though I could have sworn they were.

We discussed the history of the world a lot at home. My parents taught me that there has never been any correlation between how true something was and how fervently it was believed. Sure, some things are subjective. This may be the best sandwich you have ever had or that may be the most handsome man you have ever seen. Those are in the eye of the beholder. For those phenomena that exist outside of our perceptions, things like the way the Earth moves, the causes of illnesses, or the distance between stars, there were objective realities. Maybe undiscovered by anyone on our planet, but no less real.

People once believed with all their hearts that the sun went around the Earth. But believing it didn’t make it so. There are certainly things we believe right now that will someday be revealed to be hilariously or abhorrently ignorant. Our understanding changes with new information. Or at least it ought to.

So if a person is interested in testing their preconceptions, in discovering how things really are and why, how does one go about that? My parents taught me that the scientific method is designed for precisely this job. My father was a scientist. He was the astronomer and educator Carl Sagan. Science wasn’t just his occupation, it was the source of his worldview, his philosophy, his guiding principles. He and my mom, writer and producer Ann Druyan, taught me that belief requires evidence. They taught me that science wasn’t just a set of facts to be compared and contrasted with other philosophies but a way of testing ideas to see which ones stand up to scrutiny. They taught me that what scientists think today might be disproven tomorrow, and that’s wonderful, because that’s the pathway to a better, deeper understanding.

This left me with something of a conundrum when my dad died. I had just turned fourteen. I longed to see him again somehow. I would often dream of being reunited with him. In these dreams, I would receive an elaborate explanation about where he’d been. Usually a misunderstanding or some kind of secret mission was to blame. The dreams would all end the same way. Elated, I tell him, “I knew it! I knew you weren’t really dead! I have these dreams all the time where you come back—” And as I’d say those words, a sorrowful look would cross his face and I would realize. “This is one of those dreams, isn’t it?” He would nod apologetically and I would awaken.

Still now, more than two decades later, I sometimes have those dreams.