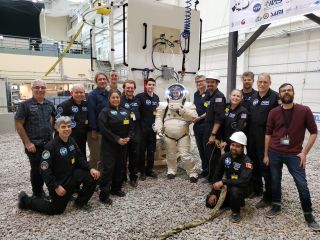 A team of citizen scientists from Project PoSSUM has completed an important set of tests with a spacesuit from Final Frontier Design.
(Image: © PoSSUM)

Thanks to a Canadian collaboration, a team of citizen scientists has completed an important set of tests with a commercial spacesuit.

Sixteen citizen scientists from Project PoSSUM (Polar Suborbital Science in the Upper Mesosphere) — a non-profit astronautics research and education program — completed a series of tests earlier this fall with an Extravehicular Activity (EVA) spacesuit prototype from Final Frontier Design, a small business based in Brooklyn, NY that designs spacesuits. The team completed the tests at the Canadian Space Agency (CSA) headquarters in Longueuil, Quebec.

The team completed these gravity-offset tests in three different gravity environments: Mars, the moon and microgravity (to replicate the gravity on the International Space Station). To create these different simulated gravities, the group used a two-axis gravity-offset system that was developed with Kansas State University.

The team tested the suit in these mock gravities in a number of walking and movement tests. They also tested the garment it with tools made by members of the team, including a hammer, shovel, soil sampler and a rock hardness tester.

Team members wearing the suit were also fitted with a biomonitoring "smart garment" from the CSA. The garment measured biometric data, including heart and breathing rates and blood-oxygen saturation while they completed their tasks.

"After donning the EVA suit, each test subject had to acclimate themselves to the new gravity environment, which often meant learning how to walk all over again," Keith Crooker, a spacecraft life-support systems scientist who was part of the testing team, told Space.com in an email. "For example, taking a simple step forward with your legs using the same amount of force that you would use to walk normally on Earth could send you sailing up several feet into the air while under a near-zero G setting of the gravity offset rig!"

The team didn't just test the suit and tools in varying gravitational environments; they also worked on a mock indoor lunar rover yard and a mock space station panel  in the CSA's facility.

"Some of the tools involved hooking industrial connectors to the ISS mockup panel using a drill," Shawna Pandya, a physician who has been a scientist-astronaut candidate with Project PoSSUM since 2015 and who developed the rock hardness tester used in this testing, told Space.com. She added that they were able to figure out what worked well with the suit, "what needs to be improved with the gravity offset system, what needs to be improved with the tools that we were using," and more.

By having a hands-on experience working in the suit, Pandya explained that the citizen-scientists were able to really feel how difficult certain tasks really are when performed while wearing a spacesuit. She noted that it was especially hard to control what you were working on while wearing large, spacesuit gloves. "We really felt like we were working on an ISS panel and it seems like an easy task description," she said. But "it is incredibly hard, there wasn't a single candidate who went through and wasn't exhausted by the end of it … how do astronauts do this for 8 hours?"

Despite the difficulties that come with working in a heavy suit in a strange environment, "it's impossible to be in a spacesuit and not have an ear to ear smile," Pandya said.