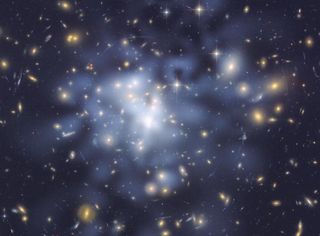 The modern study of the entire universe, the branch of science known as cosmology, owes its current status to many notable figures, going back over nearly a century of dedicated, hard-won research.

Some of these names might be familiar: Albert Einstein, Edwin Hubble, Vera Rubin, etc. But recently the Nobel Prize committee recognized the contributions of a name you might not recognize, Jim Peebles, and gave him half of the 2019 physics award, "for contributions to our understanding of the evolution of the universe and Earth's place in the cosmos."

Suffice it to say, cosmology wouldn't be where it is today without the efforts of Jim Peebles. It's one thing to state the Big Bang model in back-of-a-T-shirt simplicity (e.g., "the universe used to be smaller and hotter, and now it's not"), but it's a completely different thing to turn that into a precise mathematical formulation capable of making predictions to compare against observations. It's fair to say that Peebles helped transform cosmology from "neat and generally correct idea" to "a field of real science." Let's explore three main avenues where his insights have guided us:

If the early universe was smaller than it is today, then it also must have been hotter and more dense. And once you accept this reality, you quickly realize that, at some point in the distant past, the universe must have been so dense and so hot that it existed in a completely different state of matter.

Over 13 billion years ago, when the universe was about one millionth its present-day volume, all the stuff in the cosmos was so smooshed together that it was a plasma, a state of matter in which the electrons are ripped from atoms and free to roam about on their own. Back then, the universe was pretty intense.

But then it got older, it got bigger and it got colder. And at a certain age, the temperatures and pressures dropped below a critical threshold and electrons were able to attach themselves to atoms without immediately getting knocked off. In a flash, the universe became transparent to radiation, and that light — literally white-hot at the moment of its release — persists to the present day, soaking the cosmos.

But today that light has lost a lot of steam and is chilling just a few degrees above absolute zero, firmly in the microwave band. This "cosmic microwave background" was accidentally discovered by a pair of microwave physicists in 1964, but unbeknownst to them a group of theorists including Peebles had already predicted its existence. The microwave physicists won the Nobel in 1978, but it's never too late for the Nobel committee to recognize the theorists too.

In the 1970s, astronomer Vera Rubin discovered something funny going on with galaxies: the stars inside them were orbiting way too quickly. So quickly, in fact, that the galaxies should've flung themselves apart billions of years ago. But there they were, happy as clams.

What was going on? Did we not understand something about the nature of gravity at scales as great as galaxies? Or did the universe have an extra ingredient that had been hidden to us until Rubin's observations?

Some astronomers, including Rubin herself, thought that we needed to tweak the laws of physics to get things right. But others, including Peebles, figured that there was more to a galaxy than meets the eye. He was one of the earliest proponents of what we now call "cold dark matter" — a new form of matter that does not interact with light (and hence doesn't interact with anything else except through gravity). We now know that dark matter saturates the universe, swamping out normal matter by at least a 5:1 ratio.

Peebles and collaborators did the legwork of investigating what this new hypothesis would mean in terms of galaxy behavior, and provided helpful tests for observers to target and measure.

Today, while we still don't fully understand dark matter — and we have yet to pinpoint its exact identity — the evidence has come from multiple angles, including subtle imprints in the cosmic microwave background itself, that dark matter is a major ingredient of our universe.

But Peebles didn't stop with the earliest moments of the Big Bang or mysterious and invisible components to our universe. Peebles went big — way big.

We see in the universe around us all sorts of different kinds of galaxies in all sorts of fanciful arrangements. Some galaxies are bound together in giant clusters, while others are loners. Some are huge and hulking, and others are small and barely noticeable. And when we zoom out to the very largest scales, we see a vast "cosmic web," the largest pattern found in nature, a structure that extends from one end of the visible universe to the other.

The cosmic web is made of galaxies, and as the name suggests, looks like a cosmic spider web.

How did that happen?

Peebles and his friends led the way to explaining the origins of the cosmic web, finding that structures in our universe grow slowly over time, building up from smaller bits to larger bits with every passing eon.

They found how to look for hints of the seeds of structure in the cosmic microwave background, visible as tiny variations in temperature no bigger than 1 part in 100,000. Those variations were the locations of the first pools of slightly-higher-than-average density, where more matter (especially dark matter!) would flow over the course of millions of years.

Eventually those little nuggets would grow to become galaxies, and some galaxies pooled together to form clusters of galaxies. And since all that stuff used to build these large structures had to come from somewhere, vast empty regions opened and expanded. These became the gaps in the cosmic web, known as voids.

Over the decades Jim Peebles has written hundreds of papers and collaborated with hundreds of astronomers, astrophysicists, physicists, and cosmologists, and he was a critical player in painting the portrait of the universe that we now understand.