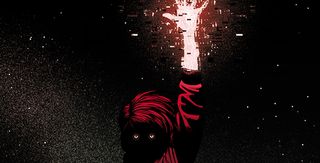 Post-"The Wicked + The Divine," comic book artist McKelvie draws and writes his next project, and it's in SPACE!
(Image: © Jamie McKelvie/Image Comics)

Jamie McKelvie and Matthew Wilson's 2020 Image Comics title has been revealed as "The Killing Horizon."

Described as "an ambitious space saga" by io9 in first reporting of the title, "The Killing Horizon" is scheduled to debut next summer.

"The post-post-apocalyptic future. Far from Earth, a specialist in studying dead alien societies is embedded with a military unit to excavate a new find. She’s done it before. It’s good work and it's safe. She thinks it’s just another job. She’s wrong," reads McKelvie's description of the project, which he will be writing and drawing. "Lost and alone, deep beneath the warped, skeletal spires of the millennia-dead city, she finds something powerful. Something unlike anything any human has ever known. Something that needs her to take it on a journey no living being has ever taken. Something that will make her a target for every side fighting a deadly war. It calls to her.  She answers."