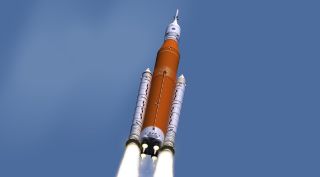 A first launch of the SLS before the end of 2020 is still doable, provided the core stage is completed by the end of 2019 and the green run test wrapped up in under six months.
(Image: © NASA)

WASHINGTON — NASA believes it is still possible to perform the first launch of the Space Launch System before the end of 2020 even if the agency decides to retain some version of a key static-fire test of the rocket's core stage.

Speaking at a May 28 meeting of the NASA Advisory Council's human exploration and operations committee, Bill Hill, deputy associate administrator for exploration systems development, said that the agency has yet to decide whether to perform what's known as the "green run," where the core stage and its four RS-25 engines are fired for eight minutes on a test stand at the Stennis Space Center in Mississippi.

"We provided the agency with a recommendation. The agency is contemplating it," he said, not discussing what that recommendation stated about the green run. "Today, our baseline is a green run."

Related: In 2020, NASA to Send Living Things to Deep Space for 1st Time Since Apollo

NASA Administrator Jim Bridenstine told a House committee March 27 that the agency was considering skipping the green run and instead shipping the core stage directly from its manufacturing site, the Michoud Assembly Facility in New Orleans, to the Kennedy Space Center. A brief test firing of the stage would take place on the pad at KSC in place of the full green run test. Skipping the green run test could cut several months from the schedule of the long-delayed SLS.

However, many outside NASA raised concerns about doing away with the green run test entirely. "There is no other test approach that will gather the critical full-scale integrated propulsion system operational data required to ensure safe operations," Patricia Saunders, chair of the Aerospace Safety Advisory Panel, said at a meeting of her committee April 25. "I cannot emphasize more strongly that we advise NASA to retain this test."

While Hill said no decision has been made about the green run test, it would likely be adjusted if it is retained. "We're looking to optimize it, make it as short as possible," he said. NASA has assigned Bill Wrobel, the former director of NASA's Wallops Flight Facility, to be the "point person" for planning for the green run.

Those changes include adding an additional shift of workers. "One of the things we discovered that was a little bit disappointing was that their schedule was basically based on a single shift," Hill said. NASA is now looking two 10-hour shifts to speed up work.

Those changes, he said, should limit the total schedule needed for the green run to six months or less. If Boeing, the SLS core stage prime contractor, is able to complete the stage and ship it to Stennis by the end of this year, that would allow the core stage to go to KSC by the end of June 2020, assuming the green run test goes as planned.

Related: NASA Has a Full Plate of Moon Missions Before Astronauts Go Back

If so, he added, "that in itself could still support a late 2020 launch date" for the first SLS launch, formerly known as Exploration Mission (EM) 1 but recently renamed Artemis-1 as part of the agency's decision to call the overall lunar exploration effort the Artemis program.

"Obviously, everything has to go perfectly" to maintain that 2020 launch date, he said, "but there's a shot."

Other elements of the Artemis-1 mission are also coming together, notably the Orion spacecraft that will be launched into cislunar space on that uncrewed flight. The crew module and the European-built service module are completing testing at KSC and will be integrated later this summer, then shipped to NASA's Plum Brook Station in Ohio in August or September for environmental testing before returning to KSC late in the year.

That work on Orion is "fifty-some" days behind schedule, Hill said. "We're working that to see if we can recover some of that."