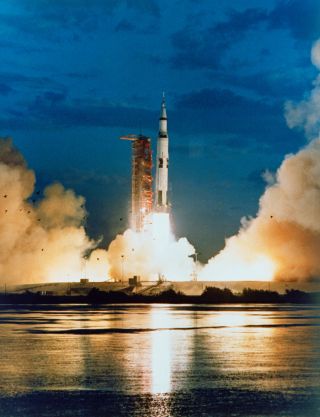 For a few magic years in the 1960s and 1970s, a powerful rocket hefted humans towards the moon. The Saturn V is probably NASA's most famous rocket, with its iconic 363-foot (110-meter) profile showing up in everything space from Lego models to wall posters and mobile games.

Yet, the last Saturn V launch was in 1975, to heft the Skylab space station into orbit. As NASA aims to bring its astronauts to the moon's surface in 2024, could we build that same rocket today? NASA's modern-day answer is the Space Launch System (SLS), a behemoth booster that has been criticized repeatedly for launch delays — it was first supposed to fly in December 2017, which now could be pushed to 2020 or later — while costing more than $10 billion.

"It's a lot late and a lot over budget; it's far from a burning success at this point," Mike Neufeld, a senior curator at the Smithsonian National Air and Space Museum's space history department whose research focuses on rockets, told Space.com.

These are fair criticisms — NASA has blown its own first launch target dates repeatedly, and Ars Technica reports that an advanced version of SLS is under budget threat — but there are other reasons that the SLS is running late. A key one is that the vehicle is more complicated than any previous rocket, John Blevins, SLS deputy chief engineer at NASA's Marshall Space Flight Center in Alabama, told Space.com.

The Saturn V was imagined as a one-destination rocket, but that's not the case for SLS, which has made its design process more complex. For example, the material that lines its inner tanks is "much beefier than it needs to be" for the rocket's first robotic mission to the moon, Blevins said, because SLS will eventually send spacecraft elsewhere.

It's a rocket that could ferry astronauts to asteroids or to Mars, depending on government priorities. The SLS could launch a massive Mars sample-return mission. And the rocket could blast robotic spacecraft to the outer system faster than ever before, allowing scientists to avoid the traditional circuitous route that requires spacecraft to pick up speed by flying past other planets.

Such a vehicle could mean that a middle- or even late-career scientist building an instrument to land on Jupiter's icy moon Europa, for example, might still be working when the spacecraft lands and performs science on the surface, Blevins said. That's because a flight path to Europa with SLS might take only a couple of years to accomplish, instead of close to a decade, with current technology and planetary flybys. (That said, NASA's Europa Clipper orbiter might launch on the SpaceX Falcon Heavy rocket, whose launch costs at just a fraction of that of SLS would save $700 million for the mission, Ars Technica added.)

The Saturn V also had launch delays, although not nearly as dramatic as SLS is facing, Neufeld pointed out. NASA had planned the first test flight for 1965, but it didn't end up launching until November 1967.

But the delays weren't blamed exclusively on the rocket. "It didn't matter, fundamentally, because the spacecraft were behind expectations," Neufeld said. Both the Apollo command and lunar modules faced development delays. NASA initially targeted a moon landing in 1967, but a series of rocket and spacecraft setbacks pushed the actual date back to July 1969, Neufeld said.

Different on the inside

If you were to line up the Saturn V and SLS side by side — something Blevins said he hopes to see in a future, massive museum exhibit — there are some immediately apparent differences.

SLS has a core stage  about the same diameter as the Saturn V's first stage, but it includes four RS-25 engines. These engines were designed for the space-shuttle program, and the first few SLS flights will rely on refurbished space shuttle engines. The RS-25 design is "the most efficient, most powerful, most power-per-mass type that's ever been built," Blevins said, exceeding the oxygen-kerosene fuel technology used by the Saturn V first stage's massive F-1 engines.

Riding alongside this core stage will be solid-rocket boosters to increase the SLS liftoff thrust — different from the Saturn V, which had no boosters at all. Blevins said most people will identify these boosters with those that the space shuttle carried, but the SLS versions are actually about twice as tall as the space shuttle's.

SLS and Saturn V both use three stages all told to heft the crew into space.

Peering at the top of the SLS, you would see a similar configuration to Apollo — a capsule where the astronauts would ride, and an abort system that can pull the crew away in case of an emergency during liftoff. "The capsule is bigger, but you couldn't tell that standing on the ground," Blevins said.

But don't be fooled — what looks similar on the outside doesn't necessarily reflect what is on the inside. The SLS has differences in its structures, fuel and avionics compared to the Saturn V. Some of the changes are due to technological advances in computing and fuels since the late 1950s, when the Saturn V was first envisioned.

Others flow from gradual evolutionary changes in NASA's industrial base over 60 years: For example, the companies involved in SLS are, in many cases, different contractors who prefer to use different rocket components than those who put together the Saturn V, Blevins said.

One major change from the Saturn V is that SLS doesn't use any kerosene. The rocket's reliance on the legacy of the shuttle program, plus subsequent development in fuel efficiency, means all the stages — except the boosters — use a combination of liquid hydrogen and liquid oxygen.

The materials are different as well, although Blevins hesitates to say that they are more advanced than Saturn V. Rather, some components are deliberately "overbuilt" for moon missions to allow SLS to fly to more distant destinations in the solar system, as necessary.

The avionics, too — the brains of a rocket — are a little different than Saturn V, Blevins said. One main difference is that SLS can communicate with the Tracking and Data Relay Satellites (TDRS) that provide excellent coverage of astronaut communications as they fly around the world. TDRS was first implemented during the space shuttle era in the 1980s; Saturn V simply did not have access to the system. Similarly, the navigation system takes advantage of developments in airplanes (particularly the Boeing 777 and 787) that succeeded the era of the Saturn V.

But there's one key area where the SLS avionics match up with those of the Saturn V: their size. Even though computers today are a tiny fraction of the size, and far more powerful, than what was available in the 1960s, engineers can't take advantage of that miniaturization.

"We spent 40 years making payloads and electronics as small as possible," Blevins said. "And then we put them on a rocket and they vibrate, when they are small, so we have to put something on to damp the vibration." So what the SLS gains in computing size, it loses by incorporating large isolators, to minimize vibrations to the electronics.

Blevins said he is confident that the SLS can meet a November 2020 launch date as long as development continues apace, but if still more delays arise, its first flight will creep into 2021, as several media outlets have speculated.

Over the next six months, the SLS team will deliver the core stage to the Stennis Space Center in Mississippi for stage evaluation and acceptance. In early 2020, engineers will put the stage on a stand and fire the engines to check their performance. One possible source of delays is that even a simple test requires larger cranes, equipment and storage spaces to move everything around, since the SLS stages are so much bigger than shuttle's were.

The launch window will be even trickier than what space shuttle veterans are used to, Blevins said, because the Earth-moon alignment is only favorable at certain times of the month.

And the launch window is also limited by the fact that the SLS team would prefer to land the spacecraft back on Earth in daylight, in order to better watch the parachutes deploy. If SLS's first flight slips beyond November 2020, the team may wait until about March for the launch, since coordinating a daytime landing is trickier during the shorter winter days, Blevins said.

The SLS team this year considered rushing the schedule by skipping some tests, Blevins said. But NASA — all the way up to administrator Jim Bridenstine — favored a slower and more sustainable approach to make sure each component works, he said.

When SLS finally starts flying, Blevins said, the hope is to continue using that line of rockets for the next 40 years as NASA expands its operations across the solar system. Whether flying astronauts to Mars or a robotic lander to Europa, SLS would be the first stage of the journey — as long as its powerful possibilities continue to justify the cost.