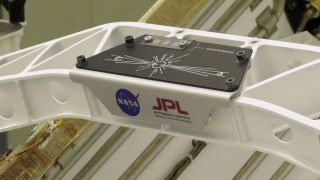 A placard commemorating NASA's "Send Your Name to Mars" campaign was installed on the Perseverance Mars rover on March 16, 2020. Three silicon chips (upper left corner) contain 10,932,295 names and the essays from 155 finalists in NASA's "Name the Rover" contest. And the sunbeams in the diagram spell out “Explore as One” in Morse code.
(Image: © NASA/JPL-Caltech)

NASA's Perseverance rover will explore Mars for all of humanity, which a coded message aboard the robot makes clear.

The car-size Perseverance, which is scheduled to launch to the Red Planet this July, carries a special commemorative plate that holds small silicon chips bearing the names of more than 10.9 million people who participated in NASA's "Send Your Name to Mars" campaign.

That plate also features a diagram of Earth, Mars and the sun, whose rays are not nearly as random as they look. Indeed, the sunbeams on this plate actually spell out "Explore as One" in Morse code, mission team members revealed via Twitter on Monday (March 30).

Some of you spotted the special message I’m carrying to Mars along with the 10.9+ million names you all sent in. “Explore As One” is written in Morse code in the Sun’s rays, which connect our home planet with the one I'll explore. Together, we persevere. https://t.co/Bsv1mqpxlA pic.twitter.com/GhcS1HgsINMarch 30, 2020

Perseverance will land next February inside Mars' 28-mile-wide (45 kilometers) Jezero Crater, which harbored a lake and a river delta in the ancient past. The rover will scour Jezero for signs of long-dead Mars life, characterize the region's geology and test out next-gen exploration gear, including a small helicopter scout and an instrument that generates oxygen from the thin, carbon dioxide-dominated Martian atmosphere.

Perseverance will have other duties as well. Chief among them will be to collect and cache samples for a future return to Earth, where scientists will be able to analyze them in detail in well-equipped labs. NASA and the European Space Agency will work together to bring these samples home, which could happen as early as 2031.

Perseverance is following in the footsteps of NASA's Curiosity rover, which has been exploring Mars' 96-mile-wide (154 km) Gale Crater since August 2012. Curiosity's main mission goal involves assessing Gale's past habitability, and the rover's work has shown that the crater hosted a potentially life-supporting lake-and-stream system for long stretches in the ancient past.

The two big rovers share the same basic body design and the same landing system — a rocket-powered sky crane that lowers the robots onto the Martian surface via cables. And we now know there's some code commonality as well: the Curiosity team designed the rover's wheels to spell out "JPL" in Morse code in the Martian dirt.

JPL is the Jet Propulsion Laboratory in Pasadena, California, NASA's go-to center for robotic planetary exploration. JPL manages the missions of both Curiosity and Perseverance, as well as many other exploration projects.