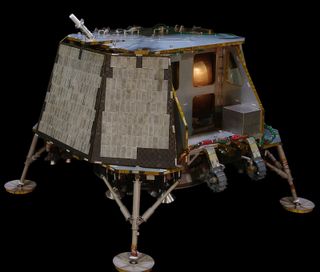 Orbit Beyond of Edison, New Jersey, had been planning to fly as many as four NASA payloads on its Z-01 lander to a lava plain in one of the moon’s craters in September 2020.
(Image: © Orbit Beyond)

One of the first three companies that NASA tapped to deliver agency payloads to the lunar surface has backed out of its deal.

In May, NASA announced that robotic landers built by Orbit Beyond, Astrobotic and Intuitive Machines would fly missions to the moon via an agency program called Commercial Lunar Payload Services (CLPS).

New Jersey-based Orbit Beyond was scheduled to fly the first of these missions with its Z-01 lander in September 2020. But that's not going to happen, NASA officials announced Monday (July 29).

"While the first three companies selected to carry payloads to the moon were announced in May, one of them, Orbit Beyond, Inc., has informed NASA that they will not be able to timely complete the awarded task order," Thomas Zurbuchen, the head of NASA's science mission directorate, said via Twitter Monday.

"As a result, NASA made a decision to comply with Orbit Beyond Inc’s request and terminated the task order on terms agreeable to both parties. Orbit Beyond, Inc. remains a CLPS contract awardee and may be eligible to compete for future opportunities," he added.

As a result, NASA made a decision to comply with Orbit Beyond Inc’s request and terminated the task order on terms agreeable to both parties. Orbit Beyond, Inc. remains a CLPS contract awardee and may be eligible to compete for future opportunities: https://t.co/Hxvj5BJCaV (3/3) pic.twitter.com/ntRoUQ7VyAJuly 29, 2019

Astrobotic and Intuitive Machines are getting $79.5 million and $77 million, respectively, for their missions, which are slated to launch in the summer of 2021. Both of those missions are still on, NASA officials said today.

Astrobotic's Peregrine lander will fly up to 14 NASA payloads (and as many as 28 in all) to a large crater called Lacus Mortis. Intuitive Machines' Nova-C lander will take up to five NASA payloads to the lunar dark spot Oceanus Procellarum. Orbit Beyond had been planning to carry up to four NASA experiments to a lava plain inside a lunar crater.

"The CLPS program continues to formulate additional requests for task-order proposals to expand the scope of NASA payloads requiring transportation services to the lunar surface in advance of human return," NASA officials wrote in a statement today. "CLPS remains strong and the project includes diverse partners helping NASA to get to the lunar surface quickly and efficiently."

NASA aims to put astronauts down at the lunar south pole by 2024, as part of an ambitious exploration program called Artemis. Artemis' long-term goal is to build up a sustainable long-term human presence at and around the moon, helping NASA and its partners prep for crewed journeys to Mars.