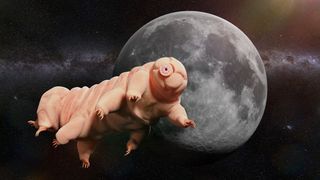 Dehydrated tardigrades that crash-landed on the moon in April won't come back to life anytime soon
(Image: © © Shutterstock)

Tardigrades, which live on every continent on Earth, are also (maybe) living on the moon, following the crash of a lunar lander carrying thousands of the microscopic water bears.

Did any of them survive the impact? If they did, what happens to them now?

When the tardigrades were placed on the Israeli moon mission Beresheet, they were in a tun state — dehydrated, with their chubby limbs and heads retracted and all metabolic activity temporarily suspended. Their arrival on the moon was unexpectedly explosive; Beresheet's crash landing on April 11 may have scattered the microorganisms onto the lunar surface.

Tubby tardigrades are notoriously tough, but were the Beresheet tardigrades hardy enough to survive that impact? It's certainly possible that some of them made it to the moon intact. But what would that mean for the moon to have what might be thousands of Earth microbes as new inhabitants? And what might it mean for the tardigrades?

Related: 8 Reasons Why We Love Tardigrades

First of all, is anyone in trouble for accidentally spilling tardigrades on the moon? That's a complicated question, but the short answer is no. Space agencies from around the world follow a decades-old treaty about what is permissible to leave on the moon, and the only explicit prohibitions are against weapons and experiments or tools that could interfere with missions from other agencies, according to the 1967 Outer Space Treaty.

In the decades that followed the treaty, other guidelines were created that acknowledged the risks of seeding other worlds with Earth microbes, and these stipulations outlined practices for sterilizing mission equipment to avoid contamination. But even though large space agencies typically follow these rules, there is no single entity enforcing them globally, Live Science previously reported.

Scientists have yet to find any evidence that the moon ever hosted living organisms (other than visiting astronauts and microbial hitchhikers from Earth) that could be threatened by microscopic invaders. However, contamination could carry serious consequences for missions to planets where life might yet be found, such as Mars; experts suggest that one potential consequence of colonizing Mars could be the extermination of native microbial life through exposure to Earth bacteria.

It's possible that even before the Beresheet tardigrades crashed on the moon, other forms of terrestrial microbes were already there: gut bacteria in abandoned bags of astronaut poo, said Mark Martin, an associate professor of biology at the University of Puget Sound in Tacoma, Washington.

"I'd be very surprised if you couldn't culture a few things out of the center of that freeze-dried material," Martin told Live Science. "Especially spore-formers. They make a very thick outer layer of their spore proteins that's known to protect them against dehydration, radiation — a variety of things."

Tardigrades survive conditions that would destroy most other organisms; they do so by expelling the water from their bodies and generating compounds that seal and protect the structure of their cells. The creatures can remain in this so-called tun state for months and still revive in the presence of water; scientists even resuscitated two tardigrades from a 30-year deep freeze in 2016.

As a tun, a tardigrade can weather boiling, freezing, high pressure and even the vacuum of space, the European Space Agency (ESA) reported in 2008, after sending water bears into orbit. Ultraviolet radiation turned out to be the tardigrades' kryptonite, as few of the creatures survived full exposure to UV light during the ESA experiments.

This could be good news for the desiccated Beresheet tardigrades. If they landed in a spot on the moon shielded from UV radiation, the microscopic creatures might stand a chance of survival, Martin said.

"My guess is that if we went up in the next year or so, recovered the wreckage, and found these tiny, little tuns and put them in water, a few of them would come back to life," he explained.

But as long as the tardigrades remain on the moon, their chances of spontaneously awakening are low. Without liquid water, the tiny creatures will remain in a tun state, and while there's evidence of ice on the moon, liquid water is nowhere to be found.

Even if the lunar tardigrades did somehow encounter liquid water while still on the moon, without food, air and a moderate ambient temperature, they wouldn't last very long once they revived, Kazuharu Arakawa, a tardigrade researcher with the Institute for Advanced Biosciences at Keio University in Tokyo, told Live Science in an email.

"Much as I would love to see the establishment of the Lunar Tardigrade Republic, I don't think that's going to happen," Martin said.