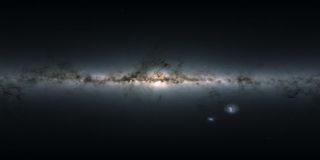 A recent study went full Indiana Jones to show that our home galaxy, the Milky Way, was a cannibal in its earlier years, swallowing five smaller galaxies.

Like Jones, the famed (albeit fictional) archaeologist, astrophysicist Duncan Forbes of Swinburne University in Australia used clues from past events to reconstruct our cosmic neighborhood's history. In this case, he used globular clusters — groups of ancient stars — orbiting the Milky Way, to show our galaxy's cannibalistic history.

Forbes' recent research (for which he was the sole author) examined properties such as the clusters' age, what they are made of, their spin (or angular momentum) and how much energy they expend in their orbits. The age and chemistry of these stars have long been known, but their spin and expended energy were only narrowed down more recently thanks to observations from the European Gaia satellite, which tracks the positions and luminosity of a billion stars.

These clues, when put together in a model, show a picture of which clusters originally "belonged" to the Milky Way, and where any outliers originally came from. While the universe looks like a static thing when gazing at the night sky, astronomers are able to see large shifts and changes over millions and billions of years.

Galaxies may collide or swallow smaller galaxies whole, and Forbes saw ample evidence of this cosmic cannibalism happening in our galaxy.

"I was able to identify individual globular clusters that did not form in the Milky Way, but rather formed in dwarf galaxies that were later acquired by the Milky Way," Forbes told Space.com in an e-mail.

Roughly half of the 200 globular clusters studied in this research were accreted (or absorbed) into the Milky Way over time. Forbes has several colorful names for these clusters, including Koala — a moniker for the "low-energy" group, since koalas sleep about 18 hours a day. (In this study, "low energy" refers to orbits that are more tightly bound to the Milky Way, and less likely to escape our galaxy's pull.)

Forbes concluded the globular clusters came from five satellite galaxies swallowed up long ago, between 5 billion and 11 billion years before the present day. (The universe, for comparison, is roughly 13.8 billion years old.) Individual accretion events would have taken a few million years each, which is long compared to a human's lifespan, but short compared with the history of the universe.

While Forbes was coy about what he plans to study next, he hinted that Andromeda could be an intriguing target for researchers looking to take a similar approach. "It has around 500 globular clusters, and so would be interesting to contrast with the Milky Way's assembly history," he said.

A study based on the research was published in late January in the Monthly Notices of the Royal Astronomical Society.