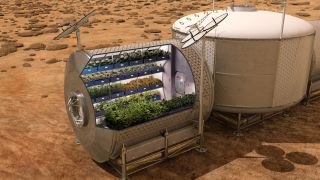 An artist's depiction of growing vegetables on Mars.
(Image: © NASA)

WASHINGTON — Take it or leaf it: Mars won't offer the sort of veggie options on display at your neighborhood supermarket.

We humans deign to munch on the order of 150 or 200 species of plants all told. And not all of those would make the journey with astronauts to the Red Planet. So far, NASA has focused its vegetable-growing efforts on lettuce, which astronauts tend to while they live on the International Space Station. The orbiting laboratory poses different challenges than the Red Planet's surface, however, and crops that Mars visitors can expect to rely on may not be to everyone's taste.

"In fact, in this particular area the soils are more alkaline so this would be OK for growing asparagus and beans and not potatoes," NASA chief scientist Jim Green said during a presentation held here last week as part of the International Astronautical Congress of soil studied by NASA's Curiosity rover. "If I had to eat asparagus for three years, I think I'd just take my helmet off and walk outside," he added.

Related: How NASA Might Bring Home Bits of Mars (In a Darth Vader Helmet)

(Reminder: If you actually want to go to Mars, you're going to need to tackle several more pressing challenges than the salad bar options. Like, you know, breathing.)

However you feel about asparagus, Green's statement is a testament to just how much scientists have learned about Mars and its soil. Curiosity was always designed to be a geologist and has been particularly adept at telling scientists about the Martian soil around its landing spot in Gale Crater.

"We find that we can get carbon, hydrogen, nitrogen, oxygen, phosphorus and sulfur out of the soil," Green said. "There's nitrates in the soils and [we've learned] that they are moist."

Scientists know all that about soil they have never seen for themselves or studied in their own laboratory. They know that based on data beamed back by dozens of orbiters and eight successful missions to the surface, and none of those robots has ever come back.

Curiosity and its drill were particularly exciting developments for the study of Martian soil, Green said, as the instrument soon hit distinctly different soil than what was on the surface. "What was really exciting when we first dug into this red soil is [that] grey material started coming out," he said. "This tells us that Mars' history is really quite exciting," with a vibrant history of water flowing over the planet's surface.

But despite what they've learned at a distance, scientists still hope to get a better look at that soil, in laboratories here on Earth. They're busy thinking through a mission that could deliver such samples in 2031. Their most pressing question won't be how well it would suit the needs of asparagus, but the analysis may still offer some tips.