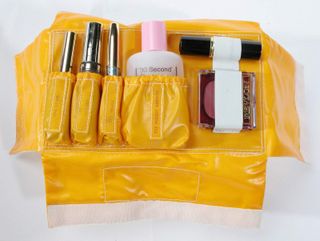 Today (July 29), in honor of National Lipstick Day, we take a look at the history of makeup in space and revisit 1978, when NASA engineers designed a makeup kit they thought female astronauts would need.

In 1978, Sally Ride, who became the first American woman in space, was selected for NASA Astronaut Group 8 — the first American astronaut class to include women. With these new recruits, NASA thought of the ways that they might accommodate the needs of women astronauts. So, what might women in space need? Well-fitting spacesuits? According to NASA engineers, they needed makeup.

"The engineers at NASA, in their infinite wisdom, decided that women astronauts would want makeup — so they designed a makeup kit. ... You can just imagine the discussions amongst the predominantly male engineers about what should go in a makeup kit," Ride said about a makeup kit designed for the women in the astronaut corps.

Sally Ride: "The engineers at NASA, in their infinite wisdom, decided that women astronauts would want makeup - so they designed a makeup kit... You can just imagine the discussions amongst the predominantly male engineers about what should go in a makeup kit." #RideOn #Classof78 pic.twitter.com/dNZ51cWELHJanuary 16, 2018

Since the 1960s, astronauts have been equipped with a hygiene kit, which included soap, toothpaste, a toothbrush, lotion, deodorant and other items. The makeup kit, which ultimately never made it to space, included eyeliner, mascara, eye shadow, eye makeup remover, blush and lip gloss.

Now, while most of the women in NASA's astronaut corps have had no interest in makeup and this kit never made it to space, there are NASA astronauts who have preferred to bring makeup, NASA astronaut Rhea Seddon shared on her website. "Some of the women Astronauts never wore makeup anyway, so they said adamantly 'NO!' Some of us did," she said.

As to why she decided to bring makeup to space, Seddon said, "If there would be pictures taken of me from space, I didn't want to fade into the background so I requested some basic items. All agreed that a small kit with items of our choosing would be a 'preference item,' that is, stowed only if requested."

As Seddon explained in her NASA oral history, these items were put together by employees in the crew systems department. "They probably got somebody that went to the makeup counter. We gave them options of this brand, this brand, this brand. They went, and they looked at the ingredients and everything, because they were concerned about offgassing and stuff not passing. It has to pass what they call "shake and bake." They have to run the temperature up and make sure that it doesn't make a mess or melt," she said.

NASA's never-launched 1978 makeup kit wasn't the only time that NASA stumbled while trying to understand the needs of women astronauts. NASA engineers famously fumbled when they asked Ride if 100 tampons would be enough for a week-long mission to space. "That would not be the right number," Ride responded.

NASA isn’t the only place where women in the space sector have had to cope with gender-based presumptions like these. In 2015, a crew of six female Russian scientists completed an eight-day experiment where they were locked in a mock spacecraft to simulate space travel. The crew was questioned about how they'd survive the eight days without men and makeup (seriously), and crew member Anna Kussmaul replied, with a thick layer of sarcasm, "I don't know how we'll survive without shampoo. Because even in this situation, we really want to stay looking pretty."