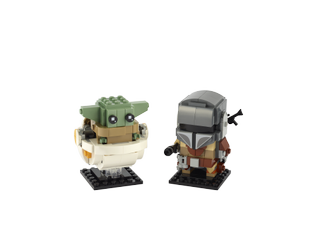 Lego has revealed their adorable, buildable new BrickHeadz from the Mandalorian.
(Image: © Lego)

Lego is at it again with two new seriously awesome, Mandalorian-inspired BrickHeadz and a rad Razor Crest.

You can now build Lego BrickHeadz versions of the beloved stars of the new series "Star Wars: The Mandalorian" — The Child (who we all know and love as "Baby Yoda") and the Mandalorian. These buildable figures are chock full of authentic details from the series. This 295-piece toy is designed for ages 10 and up. With a focus on the building and playing aspects of the toy, there are no batteries required.

You can build The Child's hoverpram and adjust its ears to create a number of different (equally adorable) expressions. The hoverpram "floats" by sitting on four different transparent Lego pieces.

Lego has revealed images of their brand-new BrickHeadz of The Child (aka "Baby Yoda") and the Mandalorian. View Deal

These BrickHeadz are available now for pre-order and will launch on Aug. 1, 2020.

You will soon be able to build the Razor Crest from "Star Wars: The Mandalorian," the hit new animated series. View Deal

The brand new Lego Razor Crest model — the armored transport shuttle from The Mandalorian, is available now for pre-order and will hit shelves on Sept. 1, 2020.

The Razor Crest carries cargo throughout the galaxy in the new, animated series and this Lego will allow you to explore the cosmos like your favorite "Star Wars" characters.

This 1,023-piece set is designed for ages 10 and up and includes not only the pieces to build the shuttle, but also 5 collectible Lego "Star Wars" characters, 4 Lego minifigures including the Mandalorian, the Child, Greef Karga, Scout Trooper and an IG-11 Lego figure.  This set also includes a dual Lego minifigure cockpit and an escape pod with sides that open up.