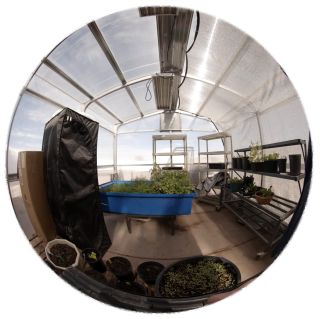 Turns out there has been a botanist on (simulated) Mars, just like in the 2015 movie "The Martian" and the Andy Weir novel it was based upon.

Paul Sokoloff, a botanist and ecologist at the Canadian Museum of Nature, was on Crew 143 of the Mars Desert Research Station (MDRS) in Utah. At the facility, which is run by the Mars Society, crews live like astronauts for a week or two — with busy schedules, "spacewalks" inside of analogue spacesuits and numerous scientific experiments to conduct.

For Sokoloff's botanical-collecting outings, however, he ditched the analogue spacesuit, which has a reputation for collecting condensation when the stand-in astronauts work too hard. "Oh my God, that helmet is so foggy," he told Space.com.

Sokoloff was so inspired by his 2014 mission that he recently returned to MDRS and continues to work with projects focused at the site. In early April, he participated in Crew 210, an international team cataloging the ecology and botanical diversity around the habitat, where Sokoloff said many unique species live.

The facility's botany experts — including Shannon Rupert, MDRS director, and David Murray, the MDRS GreenHab manager — spearhead a continuing program of plant-focused excursions from the habitat.

Beyond the walls of MDRS, the landscape is swathed in sandstone similar to the rock on Mars, and the soil is a similar shade to the surface of the Red Planet. But those aesthetics aren't the only reason crews feel like they live on another planet.

Perched a bumpy 20-minute drive away from the tiny town of Hanksville, Utah, MDRS is so remote that there are no signs of civilization, cellphone signals often fade and the night sky overhead is pure black. The remoteness affects MDRS crews, as it will their successors, and forces them to be more self-reliant when making decisions in the field.

Sokoloff gathers cuttings via tried-and-true methods that botanists have used for hundreds of years. Once he collects a sample, he carefully dries it, which can preserve the sample well for centuries, he said.

Near Sokoloff's office at the Museum of Nature's natural heritage campus in Gatineau, Quebec, he proudly pulled out three MDRS samples that he collected in 2014. These dried flowers and thousands upon thousands more are pasted carefully onto individual cards and labeled for future reference. The cards are housed in a warehouse-like room filled with filing cabinets, each drawer containing perhaps dozens of species — with a special focus on Canada's north, a key research interest of the museum's scientists.

It's not in Canada's north, but the MDRS site hosts some species that botanists believe grow only in that patch of Utah, which piques the interest of Sokoloff and his MDRS colleagues. These species include an invasive, bushy weed called Halogeton glomeratus and local wildflowers, such as Cleomella palmeriana (which features tiny yellow blossoms) and Phacelia demissa (which has purple flowers).

But the MDRS botany team knows that there are more species to be identified, and the landscape outside the habitat changes from year to year. So in April, Sokoloff and Crew 210 visited three sites to pick up local species, and the group will return at least one more time.

"The first time I was at MDRS ... there was a bunch of large, basically sod plants [grasses] and there was nothing else — no life, no flora," Murray recalled. "Then, the last time, [Crew] 210 with Paul, there was one dominant species covering the entire thing. That happened over the course of one year."

MDRS crews also simulate Mars missions by growing plants in the facility's GreenHab. Since food makes for a heavy item to haul all the way to the Red Planet, the thinking is that settlers on Mars could grow some of the produce they eat.

That idea echoes science fiction; in "The Martian," botanist Mark Watney (played by Matt Damon in the 2015 movie) famously plants potatoes to survive on the Red Planet. But it also echoes science fact. Crews on the International Space Station have harvested and eaten lettuce, among other foods, and the astronauts also perform botany experiments for researchers on Earth.

The current MDRS GreenHab replaces a predecessor facility that burned down in 2015. Experiments in the GreenHab monitor temperatures and plant activity, and MDRS managers work to make the conditions inside match those on Mars as closely as possible, Murray said. For example, the ambient light is reduced to what would be found on the Red Planet.

Since most plants can't grow in two weeks, many MDRS studies continue between crews. Murray added, however, that it is great for crew morale when a lucky group gets to harvest the plants. "You always get pictures when you do a harvest," he said. For the stand-in astronauts, who must live on shelf-stable food for weeks, the fresh food is a welcome sight and is quickly incorporated into meals. For example, a fresh harvest of basil prompted at least one crew to incorporate the herb into pizza the very same evening as the harvest, he said.

Real astronauts get a similar thrill when a spacecraft loaded with fresh fruit and other cargo pulls up at the International Space Station. It's common for crews to pose with the food, such as in this NASA picture of U.S. astronaut Scott Kelly, who spent nearly a year in space in 2015-16, surrounded by lemons and oranges during Expedition 44. After Kelly came home, he exuberantly tweeted about his first salad made on Earth.

Chances are, the first salad made on Mars will also be worth an astronaut's tweet.