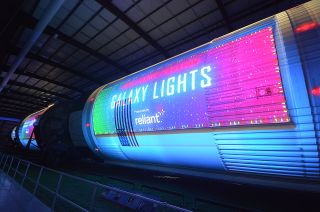 Space Center Houston is shining some festive light on NASA's iconography with a glowing nighttime display that answers the question: How many holiday bulbs does it take to cover the length of a Saturn V rocket?

Galaxy Lights, presented by Reliant, celebrates the season and space exploration with what Space Center Houston calls "the most interactive and technologically advanced light display in Texas."

With more than 750,000 lights spanning more than one million square feet (93,000 square meters), Galaxy Lights features both indoor and outdoor light displays, including the exterior of the building housing one of NASA's last remaining Saturn V rockets, which is now illuminated by 5,000 lights forming the full-length outline of the 363-foot-long (110 meter) moon booster.

"You're going to board the NASA tram that's going to travel through an LED light tunnel with more than 250,000 lights synchronized with holiday music, and you're also going to see 3D light projections at Rocket Park and watch each stage of the Saturn V take off with a storyline on the rocket with light displays. It is going to be very, very exciting," said Harris.

Indoors, suspended from the ceiling of Space Center Houston's main plaza, is a technology-driven, kinetic light show of colorful LED orbs, which shift patterns to the tune of holiday music.

"It's pretty incredible to see," said Leanne Schneider, the director of community relations at Reliant Energy. "One moment you're looking at the orbs forming an American flag, then they shift and you're looking at a sleigh or the candy cane. I think that's pretty cool. I've never seen anything like that."

"One of the things that I think is really neat about holidays in space is that we can actually celebrate holidays in space, and we can do it in a way that's familiar to us as well," says astronaut Nicole Stott in "Holidays in Space."

Galaxy Lights, presented by Reliant, runs 6 p.m. to 10 p.m. CST through Jan. 5 (with the exception of Thanksgiving, Dec. 12, Christmas Eve and Christmas Day). Regular admission is $19.95 (guests age 3 and younger enter for free). Discounts are available to Space Center Houston members and those who take part in the "Reliant Wednesdays" Salvation Army toy drive.

Space Center Houston is not alone in celebrating the season with space displays. NASA's Kennedy Space Center Visitor Complex in Florida has announced its own "Holidays in Space," featuring 10,000 sparkling lights and a retro-futuristic theme, running from Dec. 13 to 31.