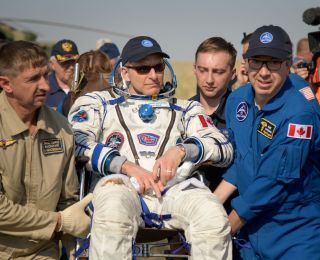 Canadian astronaut David Saint-Jacques minutes after landing in Kazakhstan on June 24 at the end of a six-month mission.
(Image: © Bill Ingalls/NASA)

OTTAWA, Ontario — Americans weren't the only ones celebrating the 50th anniversary of the first moon landing on July 20. At six museums across the country, including here at the Canadian Museum of Nature, Canadian astronauts broadcast a single message: Even though the mission of astronaut David Saint-Jacques ended a month ago, this country is poised to do a lot more in human space exploration.

In February, Canada was the first foreign country to sign on to the NASA Gateway space station project, offering a robot named Canadarm3 that will be able to repair the lunar outpost somewhat autonomously, with artificial intelligence. The big question, however, is how and when those robotics will get deployed.

NASA's push to land humans on the moon by 2024 — announced about a month after Canada's Gateway commitment — could change the nature of when Canadarm3 gets deployed, or perhaps shift robotic priorities elsewhere. But Canadian astronaut Jeremy Hansen said whatever happens, Canada is in a good place because it was first in line to help NASA.

Related: Canada's First Woman in Space Reflects on the Milestone Year That Is 2019

"Space robotics are space robotics," he continued. "Whether they're on Lunar Gateway, in low Earth orbit, servicing satellites or on the lunar surface helping us repair and maintain things, it's not the physical arm that is the challenge, it's the control. And that's what we need to tackle right now, to maintain our niche and opportunity."

Traditionally, Canada provides robotics in exchange for flight opportunities — something this country has done since the early days of the space shuttle program in the 1970s. Today the country has a corps of four astronauts eligible (or almost eligible) for more flight opportunities. But when another flight will happen is still to be negotiated — it's a little in flux as NASA begins changing its focus on long-duration missions to a host of different opportunities on commercial spacecraft and on the International Space Station.

Hansen might be the next Canadian to go into space, since he's been waiting the longest of the Canadians since his selection in 2009; the others have either flown already, or were selected in subsequent years. But no one knows for sure. Even if he does go next, Canada makes a 2.3 % contribution to the space station, which is smaller than the other partners' contributions; thus, it could be a few more years of waiting for Hansen. In the meantime, he's been busy mentoring the 2017 astronaut class, which includes two Canadian astronaut candidates, and it's expected that his duties in that role will wrap up in late 2018 or early 2019. What's next for Hansen is under discussion.

One of the things the CSA will be working on is continuing to educate politicians in the wake of the next Canadian federal election, which is expected to occur in October. Hansen said he is confident that the current plan of a Canadarm3 and other CSA projects will stay in place, because the Canadian government recently unveiled a long-awaited space plan this spring that took many years of planning to deliver. This plan was developed in consultation with industry and interest group partners, and while government directed in nature, does represent the input of other players in the Canadian space sphere.

One misconception among the general public is that once an astronaut lands, that person's mission is finished, except for the physical recovery phase. In fact, the data collection for several Canadian experiments (in which Saint-Jacques participated) is still ongoing and involves other astronauts on current or future missions. During his post-mission recovery, Saint-Jacques will also give several debriefings to international colleagues to improve future space missions, Hansen said. So, from the NASA Astronaut Office's perspective, it will be at least six months before the schedule of Saint-Jacques clears enough for him to take on normal flight-support jobs, such as working in NASA Mission Control.

Some of Saint-Jacques' early medical results show promise, and Saint-Jacques was strong enough to participate in the events July 20 by giving a speech at the Montreal Science Centre. "He actually came back in great shape," Hansen said. "Great muscle mass. We'll find out [more] about his bone density [shortly], but I think it's pretty good. He did real good in maintaining himself in good shape."

Meanwhile, Canada's two astronaut candidates are so close to the end of their basic training that they are already starting to help with normal astronaut duties at the NASA Johnson Space Center in Houston, along with the rest of their astronaut class.

Right now, Canadian astronaut candidate Josh Kutryk is doing operations work, while his colleague Jenni Sidey-Gibbons is busy finishing up her basic spacewalk (extravehicular activity) training. Other astronauts in their class are helping with future NASA programs, including the Orion spacecraft, which are supposed to bring astronauts to the moon, Hansen said.

Canadians listening in to the astronauts' livestreamed conversation coast to coast heard about several ways in which Canada helped with the Apollo 11 moon landing: It contributed the lunar landing legs manufactured by Héroux (today's Héroux-Devtek); an innovative flight antenna; and the three dozen engineers from the canceled Avro Arrow supersonic jet program, who migrated to NASA in the late 1950s, among others.

Each astronaut also talked about how the Apollo program inspired them as children and answered questions about how to think like an astronaut and perhaps, if one is lucky, craft a career to fly in space one day. For example, Saint-Jacques answered an audience question in Montreal about how you overcome self-doubt. "I tell myself, okay, it's just fear," he said in part. "It's just hesitation. It's just an impression. It's just a reminder that I've got to pay attention."

Listening in from Toronto was retired Canadian astronaut Bob Thirsk, a highly decorated physician and astronaut who also spent six months on the space station. "Wow, David, you motivated me," he said as the audience laughed.

Saint-Jacques' answer was both spontaneous and classically Canadian: "You can do it, Bob."