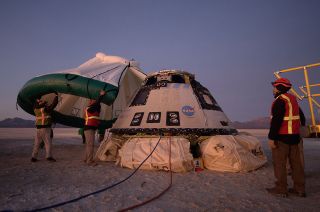 An environmental enclosure is put into position over the Boeing CST-100 Starliner spacecraft shortly after it landed in White Sands, New Mexico, on Sunday, Dec. 22, 2019. The capsule was named "Calypso" by NASA astronaut Suni Williams, who will command its first re-flight.
(Image: © NASA/Bill Ingalls)

Boeing's first Starliner to return from space is now the first with a name: Calypso.

NASA astronaut Suni Williams, who will command the first re-flight of the capsule that completed an uncrewed orbital flight test on Sunday (Dec. 22), was given the honor of christening the vehicle.

"A little homage to other explorers and the ships they rode on, I think we are going to call her 'Calypso,'" said Williams as she stood in front of her future spacecraft only an hour and a half after it touched down under parachutes and on airbags at the U.S. Army's White Sands Missile Range in New Mexico. Boeing's Starliner is the first U.S. crew capsule to return from space to solid ground rather than ocean.

In Greek mythology, Calypso was the daughter of Atlas. The Starliner launches on United Launch Alliance (ULA) Atlas V rockets.

The name of one of Saturn's small moons, Calypso also was the namesake for the converted minesweeper that became Jacques Cousteau's ocean research vessel.

Williams, NASA astronaut Josh Cassada and two international crewmates yet to be named are assigned to fly aboard Calypso on the Starliner's first operational mission to the International Space Station. Before they launch, Boeing needs to first analyze the data from Calypso's Orbital Flight Test (OFT), which was cut short by an incorrect timer, and fly a Crew Flight Test (CFT) to be completed using a different, yet-to-be-named Starliner capsule.

In the interim, Calypso also needs to be refurbished, including the installation of new forward and bottom heat shields, which were jettisoned during the OFT landing. And, as its first space capsule to fly and be flown again, Boeing wants to take time inspecting it carefully.

"There are some things we will pull out and replace or look at due to criticality," said Jim Chilton, senior vice president for Boeing's Space and Launch Division, at a post-landing press conference. "There are a lot more of those post this first flight than we plan to have in ongoing service because we are learning."

"So this one will take a little longer to turn around, and probably should," he said.

Though the timing of the naming was not announced in advance, Williams teased the pending reveal prior to the launch of the OFT mission on Friday.

"There are traditions in spaceflight, and we are working on establishing some of our traditions," said Williams in response to a question asked by collectSPACE.com at a press conference on Thursday (Dec. 19). "We are working on that, and I think those will be a little bit of a surprise in the near future."

"We are working on names for the spacecraft," she added. "This spacecraft means a lot to us, and we'll be looking at giving it a name in not too long."

The tradition of astronauts naming their capsules dates back to the first American to fly into space. Alan Shepard christened his Mercury spacecraft "Freedom 7," paving the way for the other six Mercury astronauts to name their capsules in kind (e.g., Liberty Bell 7, Friendship 7, Sigma 7 and Faith 7).

The tradition took a hiatus during Gemini (giving rise to astronaut mission patches) but returned with the Apollo moon landing program, when the names served as call signs on flights that had both command and lunar modules.

Chris Ferguson, a former NASA astronaut who now works for Boeing and who will fly on the Starliner's crewed flight test, supported restoring the custom today.

"We have been working on a couple of names, and I think it would be great if we could let Suni and Josh lend their desires to what their spacecraft is named," said Ferguson before the OFT launch. "I'd have to say they are personal touches."

"Hard to resist the allure of your first commander of your first revenue service flight picking a name," said Chilton on Sunday. "Cool name, by the way."